Blurring the Color Line
The New Chance for a More Integrated America
Richard Alba
Harvard University Press, 2009
Richard Alba argues that the social cleavages that separate Americans into distinct, unequal ethno-racial groups could narrow dramatically in the coming decades. In Blurring the Color Line, Alba explores a future in which socially mobile minorities could blur stark boundaries and gain much more control over the social expression of racial differences.
[more] 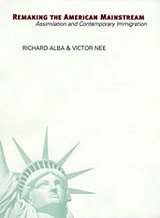 In this age of multicultural democracy, the idea of assimilation--that the social distance separating immigrants and their children from the mainstream of American society closes over time--seems outdated and, in some forms, even offensive. But as Richard Alba and Victor Nee show in the first systematic treatment of assimilation since the mid-1960s, it continues to shape the immigrant experience, even though the geography of immigration has shifted from Europe to Asia, Africa, and Latin America. Institutional changes, from civil rights legislation to immigration law, have provided a more favorable environment for nonwhite immigrants and their children than in the past.

Assimilation is still driven, in claim, by the decisions of immigrants and the second generation to improve their social and material circumstances in America. But they also show that immigrants, historically and today, have profoundly changed our mainstream society and culture in the process of becoming Americans.

Surveying a variety of domains--language, socioeconomic attachments, residential patterns, and intermarriage--they demonstrate the continuing importance of assimilation in American life. And they predict that it will blur the boundaries among the major, racially defined populations, as nonwhites and Hispanics are increasingly incorporated into the mainstream.

Reviews of this book:
Sociologists Alba and Nee provide a superb, comprehensive analysis of theory, data, and history to revise past and contemporary understandings of immigration and assimilation in the U.S. Their goal is to respond to skeptics' pessimism about new immigrants' assimilability, question misconception about the assimilation experiences of previous and current immigrant groups, reject normative baggage attached to notions of assimilation, and answer the question, 'What can assimilation look like in such a diverse and ethnically dynamic society?'
--S. M. Green, Choice

Alba and Nee have written a carefully theorized, thoughtfully argued, and empirically well-grounded book. They demonstrate persuasively that the so-called "new" immigration is not terribly different from previous ones, and that most of the descendants of today's Hispanic, Asian, and other newcomers are assimilating in much the same way as the children and grandchildren of the European immigration. Their contribution to our understanding of immigration, ethnicity and race should be read far beyond the worlds of social science scholarship.
--Herbert J. Gans, Author of Democracy and the News

Assimilation is dead, long live assimilation! Alba and Nee are fully aware of the flaws and biases in the old model of the "melting pot," but they rehabilitate it with elegant theory, persuasive facts, and careful attention to its continued racial and class-based failings. The idea of assimilation may be unfashionable, but it has the singular virtue of fitting the case--for many Americans, at any rate--more than other trendier theories do. Remaking the American Mainstream shows us how, why, and to what end.
--Jennifer L. Hochschild, co-Author, The American Dream and the Public Schools

Alba and Nee have accomplished a tour de force. They have an important story to tell and they've told it with great verve and skill, using prose that will allow this book to be widely read. Remaking the American Mainstream is an outstanding work that is truly worthy of the important topic it addresses.
--Roger Waldinger, author of Still the Promised City?: African-Americans and New Immigrants in Postindustrial New York

No phenomenon is more central to the future shape of American life than assimilation - its contested meanings, the demand for it by established Americans, the powerful but mixed incentives for it by immigrants, its social history, and its future trajectory. Alba and Nee elucidate these crucial questions and supply provocative answers. Their book is a valuable Baedeker for anyone who visits the subject.
--Peter Schuck, author of Diversity in America: Keeping Government at a Safe Distance
[more]