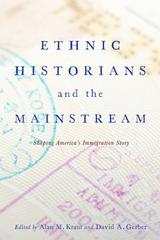 Do historians “write their biographies” with the subjects they choose to address in their research? In this collection, editors Alan M. Kraut and David A. Gerber compiled eleven original essays by historians whose own ethnic backgrounds shaped the choices they have made about their own research and writing as scholars. These authors, historians of American immigration and ethnicity, revisited family and personal experiences and reflect on how their lives helped shape their later scholarly pursuits, at times inspiring specific questions they asked of the nation’s immigrant past. They address issues of diversity, multiculturalism, and assimilation in academia, in the discipline of history, and in society at large. Most have been pioneers not only in their respective fields, but also in representing their ethnic group within American academia. Some of the women in the group were in the vanguard of gender diversity in the discipline of history as well as on the faculties of the institutions where they have taught.

The authors in this collection represent a wide array of backgrounds, spanning Europe, Africa, Asia, the Middle East, and Latin America. What they have in common is their passionate engagement with the making of social and personal identities and with finding a voice to explain their personal stories in public terms.