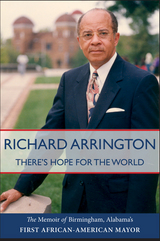 On a sultry September morning in 1955, a young African American man, the son of share corppers, boarded a Greyhound bus in Birmingham, Alabama, to leave his home state for the first time in his life. He was headed for the University of Detroit on a teaching scholarship from MilesCollege. Richard Arrington could not have guessed then that his future as a teacher would be postponed for decades by big-city politics--and that he would serve a record-setting five terms as chief executive of Alabama’s largest city.

Under Arrington’s leadership, Birmingham rebuilt itself from a foundering, steel-driven industrial center to one of the most diversified metropolitan areas in the Southeast, with an economy fueled by health care, biomedical research, engineering, telecommunications, and banking. As mayor, Arrington’s economic legacy is impressive. When he left office, Birmingham boasted a record number of jobs and the lowest unemployment rate in its history. Additionally, Birmingham had built the strongest tax base in Alabama, expanded its city limits by 60 square miles, reduced crime to its lowest level in 25 years, and funded a $260 million school construction program. Today Birmingham is financially sound and is the only city in the Southeast with a $100 million endowment fund.