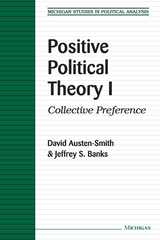 Positive Political Theory I
Collective Preference
David Austen-Smith and Jeffrey S. Banks
University of Michigan Press, 2000
Positive Political Theory I is concerned with the formal theory of preference aggregation for collective choice. The theory is developed as generally as possible, covering classes of aggregation methods that include such well-known examples as majority and unanimity rule and focusing in particular on the extent to which any aggregation method is assured to yield a set of "best" alternatives. The book is intended both as a contribution to the theory of collective choice and a pedagogic tool.
Austen-Smith and Banks have made the exposition both rigorous and accessible to people with some technical background (e.g., a course in multivariate calculus). The intended readership ranges from more technically-oriented graduate students and specialists to those students in economics and political science interested less in the technical aspects of the results than in the depth, scope, and importance of the theoretical advances in positive political theory.
"This is a stunning book. Austen-Smith and Banks have a deep understanding of the material, and their text gives a powerfully unified and coherent perspective on a vast literature. The exposition is clear-eyed and efficient but never humdrum. Even those familiar with the subject will find trenchant remarks and fresh insights every few pages. Anyone with an interest in contemporary liberal democratic theory will want this book on the shelf." --Christopher Achen, University of Michigan
David Austen-Smith is Professor of Political Science, Professor of Economics, and Professor of Management and Strategy, Northwestern University. Jeffrey S. Banks is Professor of Political Science, California Institute of Technology.
[more]

Positive Political Theory II
Strategy and Structure
David Austen-Smith and Jeffrey S. Banks
University of Michigan Press, 2005
“ A major piece of work . . . a classic. There is no
other book like it.”
— Norman Schofield, Washington University

“ The authors succeed brilliantly in tackling a large
number of important questions concerning the
interaction among voters and elected representatives
in the political arena, using a common, rigorous
language.”
— Antonio Merlo, University of Pennsylvania

Positive Political Theory II: Strategy and Structure
is the second volume in Jeffrey Banks and David
Austen-Smith’ s monumental study of the links
between individual preferences and collective choice.
The book focuses on representative systems, including
both elections and legislative decision-making
processes, clearly connecting individual preferences to
collective outcomes. This book is not a survey. Rather,
it is the coherent, cumulative result of the authors’
brilliant efforts to indirectly connect preferences to
collective choice through strategic behaviors such as
agenda-selection and voting.

The book will be an invaluable reference and teaching
tool for economists and political scientists, and an
essential companion to any scholar interested in the
latest theoretical advances in positive political theory.