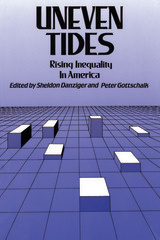 Uneven Tides
Rising Inequality in America
Sheldon H. Danziger
Russell Sage Foundation, 1993
Inequality has been on the rise in America for more than two decades. This socially divisive trend began in the economic doldrums of the 1970s and continued through the booming 1980s, when surging economic tides clearly failed to lift all ships. Instead, escalating inequality in both individual earnings and family income widened the gulf between rich and poor and led to the much-publicized decline of the middle class. Uneven Tides brings together a distinguished group of economists to confront the crucial questions about this unprecedented rise in inequality. Just how large and pervasive was it? What were its principal causes? And why did it continue in the 1980s, when previous periods of national economic growth have generally reduced inequality? Reviewing the best current evidence, the essays in Uneven Tides show that rising inequality is a complex phenomenon, the result of a web of circumstances inherent in the nation's current industrial, social, and political situation. Once attributed to the rising supply of inexperienced workers—as baby boomers, new immigrants, and women entered the labor market—the growing inequality in individual earnings is revealed in Uneven Tides to be the direct result of the economy's increasing demand for skilled workers. The authors explore many of the possible causes of this trend, including the employment shift from manufacturing to the service sector, the heightened importance of technology in the workplace, the decline of unionization, and the intensified efforts to compete in a global marketplace. Uneven Tides also examines the equally dramatic growth in the inequality of family income, and reviews the effects of family size, the age and education of household heads, and the transition to both two-earner and single-parent families. Although these demographic shifts played a role, what emerges most clearly is an understanding of the powerful influence of public policy, as increasingly regressive taxes, declining welfare benefits, and a stagnant minimum wage continue to amplify the effects of market forces on income. With the rise in inequality now much in the headlines, it is clear that our nation's ability to reverse these shifting currents requires deeper understanding of their causes and consequences. Uneven Tides is the first book to get beyond the news stories to a clear analysis of the changing fortunes of America's families. It should be required reading for anyone with a serious interest in the economic underpinnings of the country's social problems.
[more]