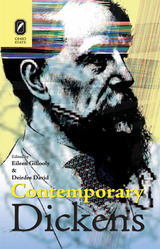 Contemporary Dickens
Eileen Gillooly Deirdre David
The Ohio State University Press, 2008
Edited by Eileen Gillooly and Deirdre David, Contemporary Dickens is a collection of essays that presents some of the most intriguing work being undertaken in Dickens studies today. Through an emphasis on the nineteenth-century origins of our current critical preoccupations and ways of knowing, these essays reveal Dickens to be our contemporary. The contributors argue that such issues as gender and sexuality, environmentalism, and the construction of national identity were frequently explored and sometimes problematically resolved by Dickens himself. They also illuminate the importance of Dickens’s place in our current reassessment of critical methodologies.
Drawing freely upon a variety of reading strategies (materialist, deconstructive, new historical, psychoanalytic, and feminist), the essays disclose new aspects of Dickens’s engagements with a number of Victorian concerns—moral philosophy, the psychology of the emotions, and life writing among them—that have once again emerged as significant objects of study in early-twenty-first century criticism. Looking at such familiar topics from fresh perspectives, Contemporary Dickens is an original and challenging contribution to Dickens studies in particular and Victorian criticism in general.
Contemporary Dickens will appeal to general readers and students of Victorian culture, as well as specialists in nineteenth-century literature, cultural studies, literary formalism, psychology, and gender studies.
[more]