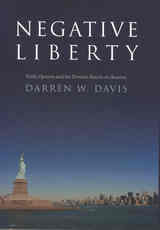 Negative Liberty
Public Opinion and the Terrorist Attacks on America
Darren W. Davis
Russell Sage Foundation, 2007
Did America's democratic convictions "change forever" after the terrorist attacks of September 11? In the wake of 9/11, many pundits predicted that Americans' new and profound anxiety would usher in an era of political acquiescence. Fear, it was claimed, would drive the public to rally around the president and tolerate diminished civil liberties in exchange for security. Political scientist Darren Davis challenges this conventional wisdom in Negative Liberty, revealing a surprising story of how September 11 affected Americans' views on civil liberties and security. Drawing on a unique series of original public opinion surveys conducted in the immediate aftermath of 9/11 and over the subsequent three years, Negative Liberty documents the rapid shifts in Americans' opinions regarding the tradeoff between liberty and security, at a time when the threat of terrorism made the conflict between these values particularly stark. Theories on the psychology of threat predicted that people would cope with threats by focusing on survival and reaffirming their loyalty to their communities, and indeed, Davis found that Americans were initially supportive of government efforts to prevent terrorist attacks by rolling back certain civil liberties. Democrats and independents under a heightened sense of threat became more conservative after 9/11, and trust in government reached its highest level since the Kennedy administration. But while ideological divisions were initially muted, this silence did not represent capitulation on the part of civil libertarians. Subsequent surveys in the years after the attacks revealed that, while citizens' perceptions of threat remained acute, trust in the government declined dramatically in response to the perceived failures of the administration's foreign and domestic security policies. Indeed, those Americans who reported the greatest anxiety about terrorism were the most likely to lose confidence in the government in the years after 2001. As a result, ideological unity proved short lived, and support for civil liberties revived among the public. Negative Liberty demonstrates that, in the absence of faith in government, even extreme threats to national security are not enough to persuade Americans to concede their civil liberties permanently. The September 11 attacks created an unprecedented conflict between liberty and security, testing Americans' devotion to democratic norms. Through lucid analysis of concrete survey data, Negative Liberty sheds light on how citizens of a democracy balance these competing values in a time of crisis.
[more]