1 books by Davis, Patricia A 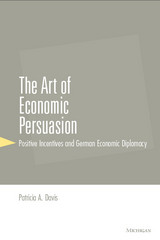 The Art of Economic Persuasion
Positive Incentives and German Economic Diplomacy
Patricia A. Davis
University of Michigan Press, 2000
Much has been written about a state's use of the threat of military force or economic sanctions to change the behavior of another state. Less is known about the use of positive measures such as economic assistance and investment as a means of influence. This study looks at the ways in which government officials use economic instruments for foreign policy gains. More specifically, it examines the means by which a government can enhance its efforts at economic persuasion by inducing domestic business trade and investing in the target nation. The author demonstrates the domestic conditions under which the state can use commercial economic incentives to achieve foreign policy goals, especially where these incentives are meant to induce cooperative behavior from another state. Using the process of German-Polish reconciliation in the 1970s and 1980s as a case study, The Art of Economic Persuasion, argues that complex institutional links between the German government and the German business community enabled the government to encourage commercial relations with Poland, which supported the government's policies.
With singular access to archives of business associations in Germany as well as numerous interviews with German and Polish officials, the author carefully retraces German foreign policy towards Poland in the 1970s and 1980s.
The Art of Economic Persuasion is a theoretical addition to the literature on international political economy and international relations. It will be of interest to specialists in international relations, foreign policy, and international political economy, as well as economists, political scientists, and historians of Germany, Poland, the United States, and Cold War relations.
Patricia Davis is Assistant Professor of Government and International Studies, University of Notre Dame.
[more]