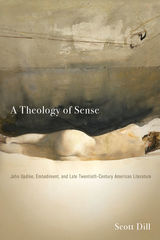 Dill explores Updike’s unique literary legacy in order to argue for a genuinely postsecular theory of aesthetic experience. Each chapter takes up one of the five senses and its relation to broader theoretical concerns: affect, subjectivity, ontology, ethics, and theology. While placing Updike’s work in relation to other late twentieth-century American writers, Dill explains their notions of embodiment and uses them to render a new account of postsecular aesthetics. No other novelist has portrayed mere sense experience as carefully, as extensively, or as theologically—repeatedly turning to the doctrine of creation as his stylistic justification. Across this examination of his many stories, novels, poems, and essays, Dill proves that Updike forces us to reconsider the power of literature to revitalize sense experience as a theological question.
[more]