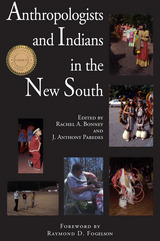 Southern Indians have experienced much change in the last half of the 20th century. In rapid succession since World War II, they have passed through the testing field of land claims litigation begun in the 1950s, played upon or retreated from the civil rights movement of the 1960s, seen the proliferation of “wannabe” Indian groups in the 1970s, and created innovative tribal enterprises—such as high-stakes bingo and gambling casinos—in the 1980s. The Native American Graves Protection and Repatriation Act of 1990 stimulated a cultural renewal resulting in tribal museums and heritage programs and a rapprochement with their western kinsmen removed in “Old South” days.

Anthropology in the South has changed too, moving forward at the cutting edge of academic theory. This collection of essays reflects both that which has endured and that which has changed in the anthropological embrace of Indians from the New South. Beginning as an invited session at the 30th-anniversary meeting of the Southern Anthropological Society held in 1996, the collection includes papers by linguists, archaeologists, and physical anthropologists, as well as comments from Native Americans.

This broad scope of inquiry—ranging in subject from the Maya of Florida, presumed biology, and alcohol-related problems to pow-wow dancing, Mobilian linguistics, and the “lost Indian ancestor” myth—results in a volume valuable to students, professionals, and libraries. Anthropologists and Indians in the New South is a clear assessment of the growing mutual respect and strengthening bond between modern Native Americans and the researchers who explore their past.