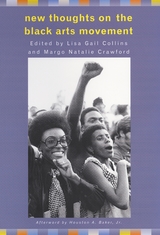 New Thoughts on the Black Arts Movement
Collins, Lisa G
Rutgers University Press, 2006
During the 1960s and 1970s, a cadre of poets, playwrights, visual artists, musicians, and other visionaries came together to create a renaissance in African American literature and art. This charged chapter in the history of African American culture—which came to be known as the Black Arts Movement—has remained largely neglected by subsequent generations of critics. New Thoughts on the Black Arts Movement includes essays that reexamine well-known figures such as Amiri Baraka, Larry Neal, Gwendolyn Brooks, Sonia Sanchez, Betye Saar, Jeff Donaldson, and Haki Madhubuti. In addition, the anthology expands the scope of the movement by offering essays that explore the racial and sexual politics of the era, links with other period cultural movements, the arts in prison, the role of Black colleges and universities, gender politics and the rise of feminism, color fetishism, photography, music, and more. An invigorating look at a movement that has long begged for reexamination, this collection lucidly interprets the complex debates that surround this tumultuous era and demonstrates that the celebration of this movement need not be separated from its critique.
[more]