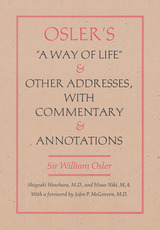 Osler's A Way of Life and Other Addresses, with Commentary and Annotations
Sir William Osler
Duke University Press, 2001
Sir William Osler (1849–1919) had a long and distinguished career as a physician and professor at McGill University, the University of Pennsylvania, the Johns Hopkins University, and finally, as the Regius Chair in Medicine at Oxford University. Over the course of his professional life, Osler gave many addresses—mostly to medical students—on medical ethics, medicine and the humanities, the relationship between the medical practitioner and the patient, and, as the titular essay makes clear, on the “way of life” he advocated for the ethical physician. He remains an inspiration to many contemporary medical practitioners; there are active Osler Societies throughout the world.
While Osler’s talks were frequently published during his lifetime and they have been published individually and in different compilations since his death, none contain the over 1500 annotations that appear here, notes that serve to explain the many philosophical, biblical, historical, and literary allusions contained in Osler’s writings.
This thoroughly explicated selection of Sir William Osler’s writings will be cherished by physicians, medical students, nurses, philosophers, theologians, and ethicists in this—and future—generations.
[more]