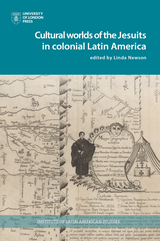 Cultural Worlds of the Jesuits in Colonial Latin America
Edited by Linda Newson
University of London Press, 2020
The Jesuits’ colonial legacy in Latin America is well-known. They pioneered an interest in indigenous languages and cultures, compiling dictionaries and writing some of the earliest ethnographies of the region. They also explored the region’s natural history and made significant contributions to the development of science and medicine. On their estates and in the missions they introduced new plants, livestock, and agricultural techniques, such as irrigation. In addition, they left a lasting legacy on the region’s architecture, art, and music. The volume demonstrates the diversity of Jesuit contributions to Latin American culture. This volume is unique in considering not only the range of Jesuit activities but also the diversity of perspectives from which they may be approached. It includes papers from scholars of history, linguistics, religion, art, architecture, cartography, music, medicine and science.
[more]