Diamonds in the Rough
A History of Alabama's Cahaba Coal Field
James Sanders Day
University of Alabama Press, 2013
Diamonds in the Rough reconstructs the historical moment that defined the Cahaba Coal Field, a mineral-rich area that stretches across sixty-seven miles and four counties of central Alabama.
Combining existing written sources with oral accounts and personal recollections, James Sanders Day’s Diamonds in the Rough describes the numerous coal operations in this region—later overshadowed by the rise of the Birmingham district and the larger Warrior Field to the north.
Many of the capitalists are the same: Truman H. Aldrich, Henry F. DeBardeleben, and James W. Sloss, among others; however, the plethora of small independent enterprises, properties of the coal itself, and technological considerations distinguish the Cahaba from other Alabama coal fields. Relatively short-lived, the Cahaba coal-mining operation spanned from discovery in the 1840s through development, boom, and finally bust in the mid-1950s.
Day considers the chronological discovery, mapping, mining, and marketing of the field’s coal as well as the issues of convict leasing, town development, welfare capitalism, and unionism, weaving it all into a rich tapestry. At the heart of the story are the diverse people who lived and worked in the district—whether operator or miner, management or labor, union or nonunion, white or black, immigrant or native—who left a legacy for posterity now captured in Diamonds in the Rough. Largely obscured today by pine trees and kudzu, the mining districts of the Cahaba Coal Field forever influenced the lives of countless individuals and families, and ultimately contributed to the whole fabric of the state of Alabama. 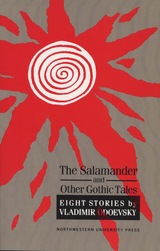 The Salamander and Other Gothic Tales
Vladimir Odoevsky
Northwestern University Press, 1992
The Salamander and Other Gothic Tales contains eight stories by Vladimir Odoevsky (1804-69). These include The Salamander, The Cosmorama, and The Sylph, Odoevsky's three main metaphysical tales. The collection as a whole represents some of the best of Russian Romantic fiction from the first half of the nineteenth century. This is the first English edition of Odoevsky's work to be published since 1965 and six of the tales are here translated for the first time.
[more]