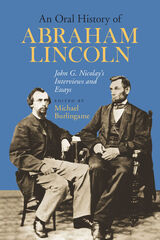 An Oral History of Abraham Lincoln
John G. Nicolay's Interviews and Essays
Edited by Michael Burlingame
Southern Illinois University Press, 2006
John C. Nicolay, who had known Lincoln in Springfield, Illinois, served as chief White House secretary from 1861 to 1865. Trained as a journalist, Nicolay had hoped to write a campaign biography of Lincoln in 1860, a desire that was thwarted when an obscure young writer named William Dean Howells got the job. Years later, however, Nicolay fulfilled his ambition; with John Hay, he spent the years from 1872 to 1890 writing a monumental ten-volume biography of Lincoln.

In preparation for this task, Nicolay interviewed men who had known Lincoln both during his years in Springfield and later when he became the president of the United States. "When it came time to write their massive biography, however," Burlingame notes, "he and Hay made sparing use of the interviews" because they had become "skeptical about human memory." Nicolay and Hay also feared that Robert Todd Lincoln might censor material that reflected "poorly on Lincoln or his wife."

Nicolay had interviewed such Springfield friends as Lincoln’ s first two law partners, John Todd Stuart and Stephen T. Logan. At the Illinois capital in June and July 1875, he talked to a number of others including Orville H. Browning, U.S. senator and Lincoln’ s close friend and adviser for over thirty-five years, and Ozias M. Hatch, Lincoln’ s political ally and Springfield neighbor. Four years later he returned briefly and spoke with John W. Bunn, a young political "insider" from Springfield at the time Lincoln was elected president, and once again with Hatch.

Browning shed new light on Lincoln’ s courtship and marriage, telling Nicolay that Lincoln often told him "that he was constantly under great apprehension lest his wife should do something which would bring him into disgrace" while in the White House. During their research, Nicolay and Hay also learned of Lincoln’ s despondency and erratic behavior following his rejection by Matilda Edwards, and they were subsequently criticized by friends for suppressing the information. Burlingame argues that this open discussion of Lincoln’ s depression of January 1841 is "perhaps the most startling new information in the Springfield interviews."

Briefer and more narrowly focused than the Springfield interviews, the Washington interviews deal with the formation of Lincoln’ s cabinet, his relations with Congress, his behavior during the war, his humor, and his grief. In a reminiscence by Robert Todd Lincoln, for example, we learn of Lincoln’ s despair at General Lee's escape after the Battle of Gettysburg: "I went into my father’ s office ... and found him in [much] distress, his head leaning upon the desk in front of him, and when he raised his head there were evidences of tears upon his face. Upon my asking the cause of his distress he told me that he had just received the information that Gen. Lee had succeeded in escaping across the Potomac river. . ."

To supplement these interviews, Burlingame has included Nicolay’ s unpublished essays on Lincoln during the 1860 campaign and on Lincoln’ s journey from Springfield to Washington in 1861, essay’ s based on firsthand testimony. 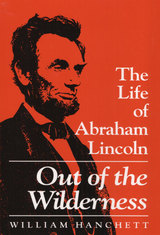 Out of the Wilderness
THE LIFE OF ABRAHAM LINCOLN
William Hanchett
University of Illinois Press, 1994
In Out of Darkness William Hanchett, a leading Lincoln Scholar,
follows Abraham Lincoln from his birth and chronicles his thirst for education,
his achievements as a lawyer and congressman, his presidency, and his
assassination.
Hanchett gives readers a deeper understanding of how Lincoln's self-directed
study and clear thinking offset his lack of a formal education, enabling
him to become a respected and successful attorney. He also shows how Lincoln's
uncanny leadership helped him to end slavery and still keep the divided
North sufficiently united to win the Civil War. By focusing on a variety
of roles and settings, Hanchett invites readers to get to know Lincoln
as a president, as well as a lover, husband, father, and friend.
"Excellent! Hanchett is a fine writer, and his biography of Lincoln
is succinct and thought-provoking."
-- Frank J. Williams, president, Abraham Lincoln Association
[more]