Not All Okies Are White
The Lives of Black Cotton Pickers in Arizona
Geta LeSeur
University of Missouri Press, 2000

Vividly revealing the challenges faced by a group of migrant workers who eventually formed the multiracial town of Randolph, Arizona, Not All Okies Are White is a brilliant, spellbinding celebration of the resilience and adaptability of people too often ignored by history texts.

Recognizing the black exodus to the American West as an overlooked but integral chapter in American history, Geta LeSeur fills the void by extending her research beyond the Mississippi River and the Mason-Dixon line, examining close-up the personal lives of third- and fourth-generation descendants of pre-Emancipation blacks. In this first full-length study to explore the migrant life of any nonwhite group within the United States and the first to focus specifically on a primarily black town in the Southwest, LeSeur deftly uncovers the stepping-stone pattern of black movement west of the Mississippi into Arkansas, Oklahoma, and Texas, and consequent migrations to Arizona and California imposed by economic and social conditions.

Not All Okies Are White recaptures the ways of life for black migrant workers, as well as Hispanics and Native Americans, in the first half of the century through richly detailed interviews of the families of Randolph's founders. Through the words of each narrator, these personal stories recount work experiences and survival strategies, offering new insights into the people's relationship to the land. The narratives reveal a creative tension between place and identity, movement and migration. LeSeur provides a historical, cultural, and literary context for the oral histories by incorporating news articles, information culled from historical society archives, analyses of films and novels, advertisements, and photographs.

An innovative blend of history telling and literary analysis, Not All Okies Are White describes LeSeur's acquaintance with and growing involvement in the lives of the residents of Randolph and surrounding farm communities. The result is a highly accessible cross-disciplinary study that will appeal to scholars and general readers interested in oral history, African American history, multicultural studies, and women's studies. 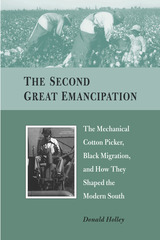 The Second Great Emancipation
The Mechanical Cotton Picker, Black Migration, and How They Shaped the Modern South
Donald Holley
University of Arkansas Press, 2000

In The Second Great Emancipation, Donald Holley uses statistical and narrative analysis to demonstrate that farm mechanization occurred in the Delta region of Arkansas, Louisiana, and Mississippi after the region’s population of farm laborers moved away for new opportunities. Rather than pushing labor off the land, Holley argues, the mechanical cotton picker enabled the continuation of cotton cultivation in the post-plantation era, opening the door for the civil rights movement, while ushering a period of prosperity into the South.