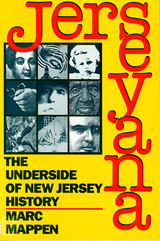 Readers of the New Jersey section of the Sunday New York Times eagerly look forward to Marc Mappen's astonishing tales of New Jersey history. Jerseyana is his first collection of these popular monthly columns. Here you will meet villains like Dutch Schultz, the mobster gunned down in a Newark gangland rubout, and heroes like Minerva Miller, a black woman who fought segregation at the turn of the century. There are famous events, like the explosion of Hindenburg, and obscure ones, like the assassination of the king of Italy by an anarchist from Paterson. There are amusing stories, like a buried treasure hoax in Morristown after the Revolutionary War, bizarre stories like the fact that the discoverer of New Jersey was allegedly devoured by cannibals, and dramatic stories, like the Jersey woman who survived Indian captivity.

Each of the fifty-four columns in this book stands as a colorful exploration in history. Together they constitute a sweeping survey of our state's rich heritage.