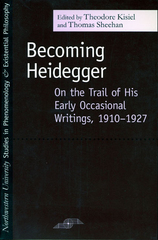 Becoming Heidegger
On the Trail of His Early Occasional Writings, 1910-1927
Theodore Kisiel
Northwestern University Press, 2007
In the decades since Martin Heidegger's death, many of his early writings--notes and talks, essays and reviews--have made it into print, but in such scattershot fashion and erratic translation as to mitigate their usefulness for understanding the development, direction, and ultimate shape of his work. This timely collection, edited by two preeminent Heidegger scholars, brings together in English translation the most philosophical of Heidegger's earliest occasional writings from 1910 to the end of 1927. These important philosophical documents fill out the context in which the early Heidegger wrote his major works and provide the background against which they appeared.

Accompanied by incisive commentary, these pieces from Heidegger's student days, his early Freiburg period, and the time of his Marburg lecture courses will contribute substantially to rethinking the making and meaning of Being and Time. The contents are of a depth and quality that make this volume the collection for those interested in Heidegger's work prior to his masterwork. The book will also serve those concerned with Heidegger's relation to such figures as Aristotle, Dilthey, Husserl, Jaspers, and Löwith, as well as scholars whose interests are more topically centered on questions of history, logic, religion, and truth. Important in their own right, these pieces will also prove particularly useful to students of Heidegger's thought and of twentieth-century philosophy in general.

Heidegger and the Tradition
Werner Marx
Northwestern University Press, 1971
A view of Heidegger's divergence from the traditional philosophies of reason.
[more]