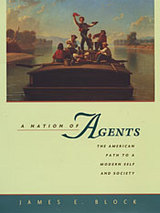 A Nation of Agents
The American Path to a Modern Self and Society
James E. Block
Harvard University Press, 2002
In this sweeping reinterpretation of American political culture, James Block offers a new perspective on the formation of the modern American self and society. Block roots both self and society in the concept of agency, rather than liberty, and dispenses with the national myth of the "sacred cause of liberty"--with the Declaration of Independence as its "American scripture." Instead, he recovers the early modern conception of agency as the true synthesis emerging from America's Protestant and liberal cultural foundations.

Block traces agency doctrine from its pre-Commonwealth English origins through its development into the American mainstream culture on the eve of the twentieth century. The concept of agency that prevailed in the colonies simultaneously released individuals from traditional constraints to participate actively and self-reliantly in social institutions, while confining them within a new set of commitments. Individual initiative was now firmly bounded by the modern values and ends of personal Protestant religiosity and collective liberal institutional authority. As Block shows, this complex relation of self to society lies at the root of the American character.

A Nation of Agents is a new reading of what the "first new nation" did and did not achieve. It will enable us to move beyond long-standing national myths and grasp both the American achievement and its legacy for modernity.

1. The American Narrative in Crisis

Part I. The English Origins of the American Self and Society
2. The Early Puritan Insurgents and the Origins of Agency
3. The Protestant Revolutionaries and the Emerging Society of Agents
4. Thomas Hobbes and the Founding of the Liberal Politics of Agency
5. John Locke and the Mythic Society of Free Agents


Part II. The Ascendancy of Agency and the First New Nation
6. The Great Awakening and the Emergent Culture of Agency
7. The Revolutionary Triumph of Agency

Part III. The Dilemma of Nationhood
8. The Liberal Idyll amidst Republican Realities
9. From the Idyll: Liberation and Reversal in a World without Bounds

Part IV. The Creation of an Agency Civilization
10. National Revival as the Crucible of Agency Character
11. From Sectarian Discord to Civil Religion
12. The Protestant Agent in Liberal Economics
13. John Dewey and the Modern Synthesis


Conclusion: The Recovery of Agency

Reviews of this book:
A Nation of Agents is a work of extravagant erudition and originality. James E. Block has read voraciously in the sources, seen things that few have seen before, and put them together as none have done before. He sets forth a new view of American culture, threading his thesis through three centuries of American thought and the preceding century of English thinking besides.
--Michael Zuckerman, Journal of American History

Reviews of this book:
What a wonder then is James Block's book, a daring master narrative and bracing theoretical exercise of the first order. It promises and delivers nothing less than a fundamental recasting of 'the American path to a modern self and society.'
--Robert Westbrook, Christian Century

Reviews of this book:
James Block's big, ambitious A Nation of Agents leaves no doubt about its aspirations in the contest to solve the Gordian knot of the relationship between the one and the many in American social thought...The subtlety and acuity with which Block develops these themes through scores of thinkers and over 500 pages can scarcely be exaggerated. A Nation of Agents is a genuinely prodigious work of scholarship.
--Daniel T. Rodgers, Modern Intellectual History

This is an original and exciting work of scholarship, in which the idea of agency takes on the characteristics of a deep cultural imperative in American life. Block's agency thesis is at once a genealogy of modern American identity and a theoretical exploration of the horizon within which American political and moral self-reflection is conducted.
--Eldon J. Eisenach, The University of Tulsa

The most remarkable aspect of this book is the author's ability to weave a single thread -- the thread of "agency" -- through four centuries of Anglo-American intellectual history. Block's great achievement is to propound a new "common theme" to American history. A Nation of Agents is a beacon for scholars seeking a usable past. If ever intellectual history is to regain its prominence in the field of American history it will require works like this.
--Harry S. Stout, Yale University
[more]

"Public reason" is one of the central concepts in modern liberal political theory. As articulated by John Rawls, it presents a way to overcome the difficulties created by intractable differences among citizens' religious and moral beliefs by strictly confining the place of such convictions in the public sphere.

Identifying this conception as a key point of conflict, this book presents a debate among contemporary natural law and liberal political theorists on the definition and validity of the idea of public reason. Its distinguished contributors examine the consequences of interpreting public reason more broadly as "right reason," according to natural law theory, versus understanding it in the narrower sense in which Rawls intended. They test public reason by examining its implications for current issues, confronting the questions of abortion and slavery and matters relating to citizenship.

This energetic exchange advances our understanding of both Rawls's contribution to political philosophy and the lasting relevance of natural law. It provides new insights into crucial issues facing society today as it points to new ways of thinking about political theory and practice. 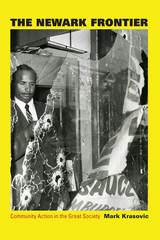 The Newark Frontier
Community Action in the Great Society
Mark Krasovic
University of Chicago Press, 2016
To many, Newark seems a profound symbol of postwar liberalism’s failings: an impoverished, deeply divided city where commitments to integration and widespread economic security went up in flames during the 1967 riots. While it’s true that these failings shaped Newark’s postwar landscape and economy, as Mark Krasovic shows, that is far from the whole story.

The Newark Frontier shows how, during the Great Society, urban liberalism adapted and grew, defining itself less by centralized programs and ideals than by administrative innovation and the small-scale, personal interactions generated by community action programs, investigative commissions, and police-community relations projects. Paying particular attention to the fine-grained experiences of Newark residents, Krasovic reveals that this liberalism was rooted in an ethic of experimentation and local knowledge. He illustrates this with stories of innovation within government offices, the dynamic encounters between local activists and state agencies, and the unlikely alliances among nominal enemies. Krasovic makes clear that postwar liberalism’s eventual fate had as much to do with the experiments waged in Newark as it did with the violence that rocked the city in the summer of 1967.
[more] 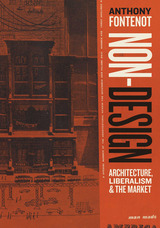 Non-Design
Architecture, Liberalism, and the Market
Anthony Fontenot
University of Chicago Press, 2021
Anthony Fontenot’s staggeringly ambitious book uncovers the surprisingly libertarian heart  of the most influential British and American architectural and urbanist discourses of the postwar period, expressed as a critique of central design and a support of spontaneous order. Non-Design illuminates the unexpected philosophical common ground between enemies of state support, most prominently the economist Friedrich Hayek, and numerous notable postwar architects and urbanists like Robert Venturi, Denise Scott Brown, Reyner Banham, and Jane Jacobs. These thinkers espoused a distinctive concept of "non-design,"characterized by a rejection of conscious design and an embrace of various phenomenon that emerge without intention or deliberate human guidance. This diffuse and complex body of theories discarded many of the cultural presuppositions of the time, shunning the traditions of modern design in favor of the wisdom, freedom, and self-organizing capacity of the market. Fontenot reveals the little-known commonalities between the aesthetic deregulation sought by ostensibly liberal thinkers and Hayek’s more controversial conception of state power, detailing what this unexplored affinity means for our conceptions of political liberalism. Non-Design thoroughly recasts conventional views of postwar architecture and urbanism, as well as liberal and libertarian philosophies.
[more] 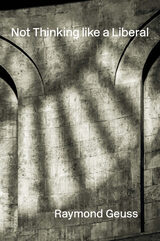 Not Thinking like a Liberal
Raymond Geuss
Harvard University Press, 2022

In a compelling meditation on the ideas that shape our lives, one of the world’s most provocative and creative philosophers explains how his eccentric early years influenced his lifelong critique of liberalism.

Liberalism is so amorphous and pervasive that for most people in the West it is background noise, the natural state of affairs. But there are nooks and crannies in every society where the prevailing winds don’t blow. Raymond Geuss grew up some distance from the cultural mainstream and recounts here the unusual perspective he absorbed: one in which liberal capitalism was synonymous with moral emptiness and political complacency.

Not Thinking like a Liberal is a concise tour of diverse intellectual currents—from the Counter-Reformation and communism to pragmatism and critical theory—that shaped Geuss’s skeptical stance toward liberalism. The bright young son of a deeply Catholic steelworker, Geuss was admitted in 1959 to an unusual boarding school on the outskirts of Philadelphia. Outside was Eisenhower’s America. Inside Geuss was schooled by Hungarian priests who tried to immunize students against the twin dangers of oppressive communism and vapid liberal capitalism. From there Geuss went on to university in New York in the early days of the Vietnam War and to West Germany, where critical theory was experiencing a major revival.

This is not a repeatable journey. In tracing it, Geuss reminds us of the futility of abstracting lessons from context and of seeking a universal view from nowhere. At the same time, he examines the rise and fall of major political theories of the past sixty years. An incisive thinker attuned to both the history and the future of ideas, Geuss looks beyond the horrors of authoritarianism and the shallow freedom of liberalism to glimpse a world of genuinely new possibilities.