2 books about Rufinus of Aquileia 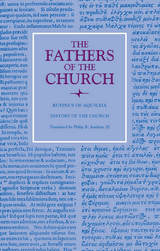 History of the Church
Phillip R. Rufinus of Aquileia
Catholic University of America Press, 2017
Rufinus of Aquileia's History of the Church, published in 402 or 403, is a translation and continuation of that of Eusebius of Caesarea. Eusebius's history tells the story of Christianity from its beginning down to the year 325; Rufinus carries the story forward to 395, the year of the death of Theodosius I. Rufinus demonstrates both a superb understanding of Eusebius's text and a tendency to translate it freely or even to misrepresent it when he judges that it does not do justice to the unity of faith and order which he is convinced is an essential element of the churchs constitution. He excises and rewrites passages liberally, but he retains in his translation Eusebius's revolutionary citation of sources, a historiographical method which would eventually prove so fruitful in the literature of the Latin church.
[more] 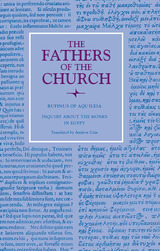 Inquiry about the Monks in Egypt
Rufinus of Aquileia
Catholic University of America Press, 2020
From September 394 to early January 395, seven monks from Rufinus of Aquileia’s monastery on the Mount of Olives made a pilgrimage to Egypt to visit locally renowned monks and monastic communities. Shortly after their return to Jerusalem, one of the party, whose identity remains a mystery, wrote an engaging account of this trip. Although he cast it in the form of a first-person travelogue, it reads more like a book of miracles that depicts the great fourth-century Egyptian monks as prophets and apostles similar to those in the Bible. This work was composed in Greek, yet it is best known today as Historia monachorum in Aegypto (Inquiry about the Monks in Egypt), the title of the Latin translation of this work made by Rufinus, the pilgrim-monks’ abbot. The Historia monachorum is one of the most fascinating, fantastical, and enigmatic pieces of literature to survive from the patristic period. In both its Greek original and Rufinus’s Latin translation it was one of the most popular and widely disseminated works of monastic hagiography during Late Antiquity and the Middle Ages. Modern scholars value it not only for its intrinsic literary merits but also for its status, alongside Athanasius’s Life of Antony, the Pachomian dossier, and other texts of this ilk, as one of the most important primary sources for monasticism in fourth-century Egypt. Rufinus’s Historia monachorum is presented here in English translation in its entirety. The introduction and annotations situate the work in its literary, historical, religious, and theological contexts.
[more]