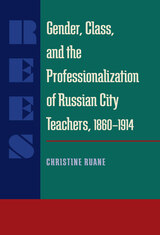 Gender, Class, and the Professionalization of Russian City Teachers, 1860–1914
Christine Ruane
University of Pittsburgh Press, 1994
Christine Ruane examines the issues of gender and class in the teaching profession of late imperial Russia, at a time when the vocation was becoming increasingly feminized in a zealously patriarchal society. Teaching was the first profession open to women in the 1870s, and by the end of the century almost half of all Russian teachers were female. Yet the notion that mothers had a natural affinity for teaching was paradoxically matched by formal and informal bans against married women in the classroom. Ruane reveals not only the patriarchal rationale but also how women teachers viewed their public roles and worked to reverse the marriage ban. 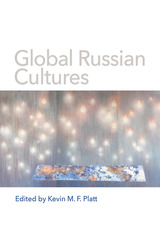 Global Russian Cultures
Edited by Kevin M. F. Platt
University of Wisconsin Press, 2020
Is there an essential Russian identity? What happens when "Russian" literature is written in English, by such authors as Gary Shteyngart or Lara Vapnyar? What is the geographic "home" of Russian culture created and shared via the internet? Global Russian Cultures innovatively considers these and many related questions about the literary and cultural life of Russians who in successive waves of migration have dispersed to the United States, Europe, and Israel, or who remained after the collapse of the USSR in Ukraine, the Baltic states, and the Central Asian states.

The volume's internationally renowned contributors treat the many different global Russian cultures not as "displaced" elements of Russian cultural life but rather as independent entities in their own right. They describe diverse forms of literature, music, film, and everyday life that transcend and defy political, geographic, and even linguistic borders. Arguing that Russian cultures today are many, this volume contends that no state or society can lay claim to be the single or authentic representative of Russianness. In so doing, it contests the conceptions of culture and identity at the root of nation-building projects in and around Russia.
[more]

Lessons in Diplomacy from Colonial America to the Cold War

"In a time when negotiations, both great and small, continue to shape our world, this book provides an excellent opportunity to learn from the past and understand the present.”—Kofi Annan, Nobel Peace Prize Winner and former Secretary General of the United Nations

“For anyone with an interest in diplomacy and political history, Stanton's book is both entertaining and informative.” —Foreign Policy Watch

“Every professional concerned with dispute resolution and every student of negotiation has much to learn from Fredrik Stanton's lively stories of eight history-shaping negotiations.”—Robert H. Mnookin, Chair Program on Negotiation, Harvard Law School

“An excellent introduction into some of the great triumphs and failures of modern diplomacy.”—Seattle Post-Intelligencer

“Stanton deftly illustrates that the power of haggling can easily rival that of any army or warhead.”—Roll Call

“Exhaustive research and careful thought have enabled Stanton to employ an extraordinary writing talent to produce a contribution to history and a source of enjoyable reading.”—New York Law Journal

“Stanton brings back to life both famous and some long forgotten personalities in the history of major American, European, and Asian negotiations. He persuasively makes his case for the importance of negotiators and negotiations both when wars can be kept from beginning and when wars end. He weaves in deft descriptions of the personal strengths and foibles of negotiators and homes in on the ability of the best to improvise when maneuvering on unfamiliar terrain.” —Ambassador Richard W. Murphy, Council on Foreign Relations

Words as much as weapons have shaped the course of history. Whether to avert, resolve, assist, or secure the outcome of a conflict, diplomacy in the modern age has had great triumphs and bitter failures, from the Cuban Missile Crisis in 1962, which narrowly spared humanity from a nuclear Armageddon, to the Treaty of Versailles after World War I, which created problems that still confront us today. Drawing on primary sources, transcripts, and interviews, Great Negotiations: Agreements that Changed the Modern World tells the stories of eight key episodes in modern diplomacy. From Benjamin Franklin securing crucial French support for the American revolution to Reagan and Gorbachev laying the groundwork to eliminate an entire class of nuclear weapons, Fredrik Stanton explains what each party brought to the negotiating table, the stakes, the obstacles to success, and how they were overcome.