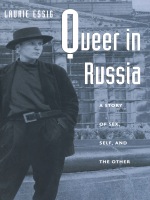 Queer in Russia
A Story of Sex, Self, and the Other
Laurie Essig
Duke University Press, 1999
In Queer in Russia Laurie Essig examines the formation of gay identity and community in the former Soviet Union. As a sociological fieldworker, she began her research during the late 1980s, before any kind of a public queer identity existed in that country. After a decade of conducting interviews, as well as observing and analyzing plays, books, pop music, and graffiti, Essig presents the first sustained study of how and why there was no Soviet gay community or even gay identity before perestroika and the degree to which this situation has—or has not—changed.
While male homosexual acts were criminalized in Russia before 1993, women attracted to women were policed by the medical community, who saw them less as criminals than as diseased persons potentially cured by drug therapy or transsexual surgery. After describing accounts of pre-perestroika persecution, Essig examines the more recent state of sexual identities in Russia. Although the fall of communism brought new freedom to Russian queers, there are still no signs of a mass movement forming around the issue, and few identify themselves as lesbians or gay men, even when they are involved in same-sex relations. Essig does reveal, however, vibrant manifestations of gay life found at the local level—in restaurants, discos, clubs, and cruising strips, in newspapers, journals, literature, and the theater. Concluding with a powerful exploration of the surprising affinities between some of Russia’s most prominent nationalists and its queers, Queer in Russia fills a gap in both Russian and cultural studies.
[more]