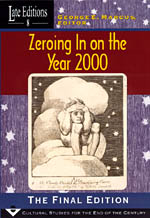 Zeroing In on the Year 2000
The Final Edition
Edited by George E. Marcus
University of Chicago Press, 2000
Late Editions 8 is the final volume in the annual series devoted to documenting the diverse social and cultural transitions of the fin-de-siècle just past into the twenty-first century. Through the innovative use of conversations and interviews, this series has ranged over many topics in many places, including corporations, media, science and technology, government, political culture, journalism, and social movements, always offering access to the points of view and experiences of people engaged in crucial processes of change.

The book begins with a fascinating, at times poignant, look back at the inception and progress of the series, in which the contributors reflect on how the shifting contexts for the production and reception of the series has been a reliable barometer of the profound ways in which traditional forms of knowledge about society are changing. Then, appropriate to the end of the century and of the series, the focus turns to pieces that deal with social phenomena that evoke the value of zero. They explore the idea of a zero state as it relates to artificial intelligence, euthanasia, cryonics, money, and the disappearing idea of society itself in the discourse of contemporary politics.

Far from being the loss of meaning, the consideration of zero entails the proliferation of meaning in the face of voids, absences, and ultimately, of puzzles like the contemplation of death in life. In this way, so many of the fin-de-siècle conditions that have been documented in this series have exemplified precisely this quest for meaning at or near zero points of change, of ends and beginnings, in social life.
[more]