Essayist Catharine Savage Brosman explores the relationship of human beings to their environment, traveling from American deserts to dense European urban settings. Whether sipping wine in a Parisian café, partying with the jet set in Aspen, or contemplating the arid desert West that she loves, Brosman inhabits these settings, and many others, with a sense of adventure and discovery. To read these essays is to enjoy the company of a lively, thoughtful, original mind. Brosman’s "higher ground" is that place we all seek, where we can find and express our own best selves. 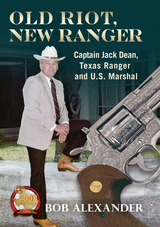 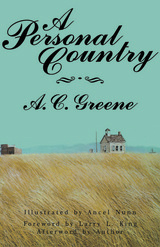 A Personal Country
A. C. Greene
University of North Texas Press, 1998
This book brings alive what one man feels about his childhood home. The place is West Texas, seen across a long vista in which today’s events and people merge with the author’s boyhood and young manhood.

It is a harsh, remote country, where the weather is always very close and the horizon far away. The Brazos country of long-ago Fourth of July fishing expeditions; the grass-grown remains of a way station of the Butterfield Stage Line; the streets of Abilene; the sparse grazing lands under infinite skies-all are made resonant by a native son’s affection and understanding. It is a way of life-resilient and persnickety-that is almost gone.

Above all, it is people: the author’s grandmother, who had a mortal fear of bridges and whose premonitions of unnamed calamities (that as often as not happened), both alarmed and pleased the young boy; Uncle Aubrey, “who married late”; the blacksmith they awakened in the dead of night; the familiar neighbors; the rare and deliciously mysterious strangers.

With humor and strong, unsentimental feeling, A. C. Greene conserves for us the priceless eccentricities of place and person that are being flattened out-almost literally bulldozed away-by the impatient, insatiable onrush of the twentieth century. His West Texas is a very personal country, but what he seeks to share will be familiar to all who take pleasure in the memories that tie them to their own special region of America.
[more] 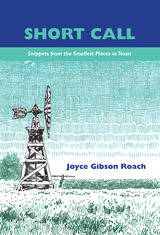