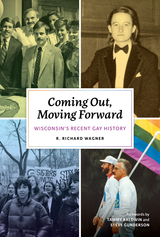 Coming Out, Moving Forward
Wisconsin’s Recent Gay History
R. Richard Wagner
Wisconsin Historical Society Press
Coming Out, Moving Forward, the second volume in R. Richard Wagner’s groundbreaking work on gay history in Wisconsin, outlines the challenges that LGBT Wisconsinites faced in their efforts to right past oppressions and secure equality in the post-Stonewall period between 1969 and 2000. During this era, Wisconsin made history as the first state to enact a gay rights law prohibiting discrimination in employment, housing, and public accommodations on the basis of sexual orientation. It also became the first state to elect three openly gay/lesbian persons to Congress.

In this volume, R. Richard Wagner draws on historical research and materials from his extensive personal archive to not only chronicle an important movement, but also to tell the stories of the state’s LGBT pioneers—from legislators and elected officials to activists, businesspeople, and everyday citizens. Coming Out, Moving Forward documents the rich history of Wisconsin’s LGBT individuals and communities as they pushed back against injustice and found ways to live openly and proudly as themselves.

Coming Out, Moving Forward is a continuation to the first volume in this series, We’ve Been Here All Along. 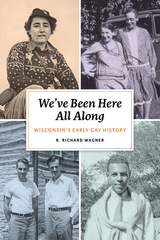 We’ve Been Here All Along
Wisconsin’s Early Gay History
R. Richard Wagner
Wisconsin Historical Society Press, 2019
The first of two groundbreaking volumes on gay history in Wisconsin, We’ve Been Here All Along provides an illuminating and nuanced picture of Wisconsin’s gay history from the reporting on the Oscar Wilde trials of 1895 to the landmark Stonewall Riots of 1969. Throughout these decades, gay Wisconsinites developed identities, created support networks, and found ways to thrive in their communities despite various forms of suppression—from the anti-vice crusades of the early twentieth century to the post-war labeling of homosexuality as an illness to the Lavender Scare of the 1950s.

In We’ve Been Here All Along, R. Richard Wagner draws on historical research and materials from his own extensive archive to uncover previously hidden stories of gay Wisconsinites. This book honors their legacy and confirms that they have been foundational to the development and evolution of the state since its earliest days
[more]