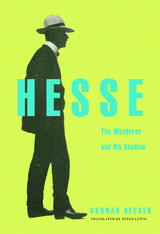 Hesse
The Wanderer and His Shadow
Gunnar Decker
Harvard University Press, 2018
Against Nazi dictatorship,the disillusionment of Weimar, and Christian austerity, Hermann Hesse’s stories inspired a nonconformist yearning for universal values to supplant fanaticism in all its guises. He reenters our world through Gunnar Decker’s biography—a champion of spiritual searching in the face of mass culture and the disenchanted life.
[more]

Petrarch
Everywhere a Wanderer
Christopher S. Celenza
Reaktion Books, 2017
Born in Tuscany in 1304, Italian poet Francesco Petrarca is widely considered one of the fathers of the modern Italian language. Though his writings inspired the humanist movement and subsequently the Renaissance, Petrarch remains misunderstood. He was a man of contradictions—a Roman pagan devotee and a devout Christian, a lover of friendship and sociability, yet intensely private.

In this biography, Christopher S. Celenza revisits Petrarch’s life and work for the first time in decades, considering how the scholar’s reputation and identity have changed since his death in 1374. He brings to light Petrarch’s unrequited love for his poetic muse, the anti-institutional attitude he developed as he sought a path to modernity by looking backward to antiquity, and his endless focus on himself. Drawing on both Petrarch’s Italian and Latin writings, this is a revealing portrait of a figure of paradoxes: a man of mystique, historical importance, and endless fascination. It is the only book on Petrarch suitable for students, general readers, and scholars alike.
[more]

The Wanderer
Carole J. Garrison
2Leaf Press, 2020
In The Wanderer, Carole J. Garrison fulfills her bucket list by meeting with the people who fascinate her and the places that lead her to them. Through her journeys, she explores the unexpected human connections that transform the experience of travel, and she celebrates the gifts of kindness she encounters around the world from the perspective of a solo female traveler. In each new place she visits, the nomadic Garrison keeps company with a cast of fantastic characters, each of whom opens her eyes to new cultural perspectives while inspiring love and laughter. The Wonderer is a heartfelt and honest memoiristic travelogue that invites us into the life and journeys of Garrison. 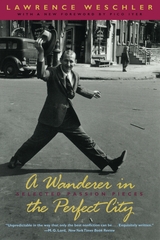 A Wanderer in the Perfect City
Selected Passion Pieces
Lawrence Weschler
University of Chicago Press, 2006
“There is something both marvelous and hilarious,” writes Lawrence Weschler, “in watching the humdrum suddenly take flight. This is, in part, a collection of such launchings.”

Indeed, the eight essays collected in A Wanderer in the Perfect City do soar into the realm of passion as Weschler profiles people who “were just moseying down the street one day, minding their own business, when suddenly and almost spontaneously, they caught fire, they became obsessed, they became intensely focused and intensely alive.” With keen observations and graceful prose, Weschler carries us along as a teacher  of rudimentary English from India decides that his destiny is to promote the paintings of an obscure American abstract expressionist; a gifted poker player invents a more exciting version of chess; an avant-garde Russian émigré conductor speaks Latin, exclusively, to his infant daughter; and Art Spiegelman composes Maus. But simple summaries can’t do these stories justice: like music, they derive their character from digressions and details, cadence and tone. And like the upwelling of passion Weschler’s characters feel, they are better experienced than explained.

“Weschler seems so hungry for life that the rest of us become hungry for him . . . a magician, a performer, and a scholar. All in one.”—from the Foreword by Pico Iyer

“Weschler is the owner of a large dose of novelistic vision, and a particularly poetic set of ears, but . . . as important an endowment as a novelist’s eye or a poet’s ear is still the journalistic nose which led him down the proverbial alley.”—National Post (Canada)

“Weschler is a thoughtful observer and a superb storyteller.”—Minneapolis Star Tribune