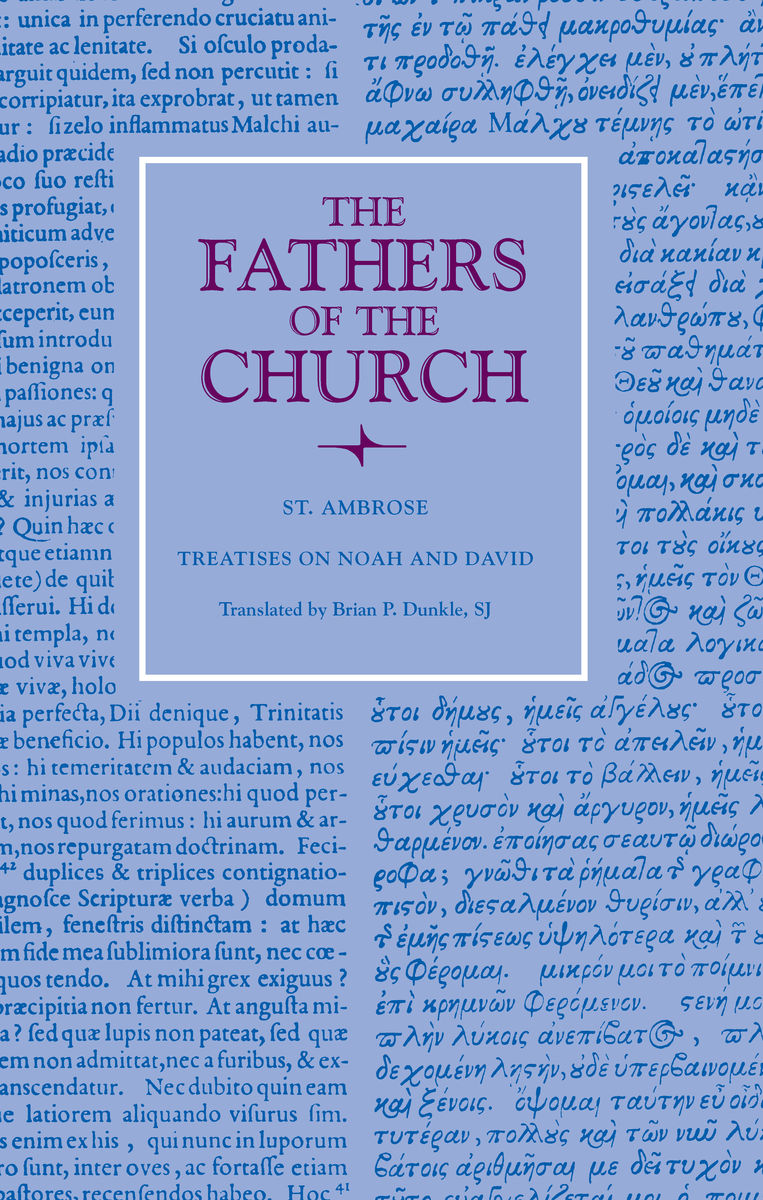 Treatises on Noah and David

The fathers of the church;

ABOUT THIS BOOK
These sermons by Ambrose of Milan (340–397 AD) provide a window into the preaching and scriptural exegesis of the legendary bishop, whose exposition of the Old Testament was instrumental in the conversion of Augustine of Hippo and in the development of Latin theology. In his treatise On Noah and his two Defenses for David, Ambrose borrows from influential Greek theologians, including Philo of Alexandria, Origen, and Didymus the Blind, while developing his own commentary on the exemplary patriarchs. Ambrose’s exegesis typifies both his attention to the letter of Scripture as well as his spiritual and allegorical reading of the holy figures or “saints” who lived before Christ.

The first treatise presents Noah as a model just man, as Ambrose pairs the literal and the higher or spiritual meaning of the Genesis flood narrative to address topics ranging from the Genesis narrative to Stoic ethics to the Incarnation. In his defense of David to the emperor Theodosius, Ambrose ties David’s sin and repentance to his own close reading of Psalm 51(50), David’s plea for himself in his famous “Miserere.” While the authenticity of the third treatise included in the volume, the Second Apology of David, has long been challenged, recent scholarship suggests that it transmits Ambrose’s own preaching, which applies the lessons of David’s life to the situation of gentile unbelievers, Jews, and the church; even if it is the work of a later imitator, the Second Apology is a compelling and systematic treatment of the David’s sin and repentance as relevant to Christian morality and doctrine.

The three treatises, previously unavailable in English translation, broaden our understanding of exegesis in the Latin West and our interpretation of Ambrose as preacher and exegete.
TABLE OF CONTENTS
Contents
Acknowledgments
Abbreviations
Select Bibliography
Ambrose and the Three Treatises
Ambrose on Scripture: Allegory and Catechesis
On Noah
Ambrose and Spiritual Interpretation in On Noah
Date and Setting of On Noah
The Defenses of David
A Defense of the Prophet David to the Emperor Theodosius
Date and Setting of the Defense of the Prophet David
The Second Defense of David,
Text and Translation,
Treatises on Noah and David
On Noah
A Defense of the Prophet David to Theodosius Augustus
The Second Defense of David
Indicies
General Index
Index of Holy Scripture