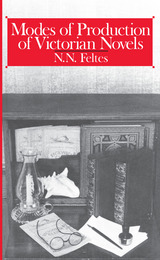 In this sophisticated application of modern Marxist thought, N. N. Feltes demonstrates the determining influence of nineteenth-century publishing practices on the Victorian novel. His dialectical analysis leads to a comprehensive explanation of the development of capitalist novel production into the twentieth century.

Feltes focuses on five English novels: Dickens's Pickwick Papers, Thackeray's Henry Esmond, Eliot's Middlemarch, Hardy's Tess of the d'Urbervilles, and Forster's Howards End. Published at approximately twenty year intervals between 1836 and 1920, they each represent a different first-publication format: part-issue, three-volume, bimonthly, magazine-serial, and single-volume. Drawing on publishing, economic, and literary history, Feltes offers a broad, synthetic explanation of the relationship between the production and format of each novel, and the way in which these determine, in the last instance, the ideology of the text.

Modes of Production in Victorian Novels provides a Marxist structuralist analysis of historical events and practices described elsewhere only empirically, and traces their relationship to literary texts which have been analyzed only idealistically, thus setting these familiar works firmly and perhaps permanently into a framework of historic materialism.


Preface
1. The Production of a Commodity-Text: The Moment of Pickwick
2. Equipoise and the Three-Decker: The Production of Henry Esmond
3. One Round of a Long Ladder: Gender, Profession, and the Production of Middlemarch
4. Lateral Advance: Tess and the Necessities of Magazine Publication
5. Anyone of Everybody: Net Books and Howards End
Notes
Index