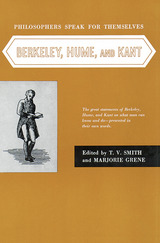 Philosophers Speak for Themselves: Berkeley, Hume, and Kant
edited by Thomas Vernor Smith and Marjorie Grene
University of Chicago Press, 1957
Paper: 978-0-226-76482-5
The philosophic search for truth has been evident in all ages and among all peoples. The developments of each generation require new philosophies and the recasting of old ones. The eighteenth century was no exception, and the scientific advances of the times brought about many innovations in philosophic thought. At a time when scientists were reducing certain phenomena of the natural world to expressions of a few simple mathematical laws, men such as Berkeley, Hume, and Kant were trying to discover how far and on what basis human reason could be applied with similar success in other fields. The selections in this book, preceded by short biographical sketches, document this philosophic search. "The selections are liberal and well chosen, indeed only an examination of the table of contents will give an adequate idea of the value of this volume. . . . How better can one become a modern thinker than by reading and studying at first hand the writings that have made modern thought possible?"—Roger W. Holmes, The Philosophical Review
TABLE OF CONTENTS


I. George Berkeley
Three Dialogues between Hylas and Philonous
II. David Hume
Selections from A Treatise of Human Nature
III. Immanuel Kant
Prolegomena to Any Future Metaphysics
Foundations of the Metaphysics of Ethics, Section I