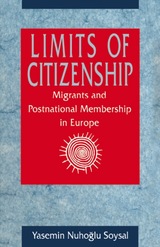 In many Western countries, rights that once belonged solely to citizens are being extended to immigrants, a trend that challenges the nature and basis of citizenship at a time when nation-states are fortifying their boundaries through restirictive border controls and expressions of nationalist ideologies. In this book, Yasemin Soysal compares the different ways European nations incorporate immigrants, how these policies evolved, and how they are influenced by international human rights discourse.

Soysal focuses on postwar international migration, paying particular attention to "guestworkers." Taking an in-depth look at France, Germany, the Netherlands, Sweden, Switzerland, and the United Kingdom, she identifies three major patterns that reflect the varying emphasis particular states place on individual versus corporate groups as the basis for incorporation. She finds that the global expansion and intensification of human rights discourse puts nation-states under increasing outside pressure to extend membership rights to aliens, resulting in an increasingly blurred line between citizen and noncitizen. Finally, she suggests a possible accommodation to these shifts: specifically, a model of post-national membership that derives its legitimacy from universal personhood, rather than national belonging.

This fresh approach to the study of citizenship, rights, and immigration will be invaluable to anyone involved in issues of human rights, international migration, and transnational cultural interactions, as well as to those who study the contemporary transformation of the nation-state, nationalism, and globalization.
TABLE OF CONTENTS