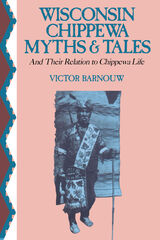 BUY
Wisconsin Chippewa Myths & Tales: And Their Relation to Chippewa Life
by Victor Barnouw
University of Wisconsin Press, 1979
Paper: 978-0-299-07314-5
Wisconsin Chippewa Myths & Tales, originally published in 1977, was the first collection of Chippewa folklore to provide a comparative and sociological context for the tales.  These  myths and tales were recorded between 1941 and 1944 by four young field workers who later became prominent anthropologists: Joseph B. Casagrande, Ernestine Friedl, Robert E. Ritzenthaler, and Victor Barnouw himself.  The tales—which include stories of tricksters, animals, magical powers, and cannibal ice-giants—were told primarily by five members of the Lac Court Oreilles and Lac du Flambeau bands of Chippewa: John Mink, Prosper Guibord, Delia Oshogay, Tom Badger, and Julia Badger.  Wisconsin Chippewa Myths & Tales  is read as much for its fascinating stories as for its scholarship.
AUTHOR BIOGRAPHY
Victor Barnouw (1916–1989) was professor emeritus of anthropology at the University of Wisconsin–Milwaukee and the first recipient, in 1968, of the American Anthropological Association’s annual Stirling Award in culture and personality.  He is the author of An Introduction to Anthropology, Volumes I and II,  and Culture and Personality.
REVIEWS

“Victor Barnouw is already well known for his various contributions to the study of Chippewa life and culture and in this volume he uses his specialist knowledge to elucidate a number of myths and tales — tales about animals and ‘windigos,’ stories about the two sisters Matchikwewis and Oshkikwe, and the long (and involved) Wenebojo Origin Myth. Helpful explanatory notes are attached to each story and Barnouw succeeds in judiciously blending his scholarship with a certain lucidity of style: the texts are eminently readable, and the work contains a sensible reference system, and a useful Introduction.”—Lore and Literature

“The 60 examples published by Victor Barnouw were collected entirely in Wisconsin and thus add an important comparative dimension to our knowledge of Chippewa folklore. . . . This is not a book of ‘Indian legends’ appropriate for grade school or summer camp use as the title might suggest, but an excellent and highly readable study for serious students of folklore and American Indian culture.”—Wisconsin Academy Review

“This is a work that can be used in the classroom. At the same time, Barnouw’s lucid style makes it good reading.”—Vivian J. Rohrl, The Journal of Psychological Anthropology