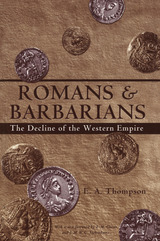 Available for the first time in paperback, this classic work by renowned historian E.A. Thompson examines the fall of the Roman Empire in the West from the barbarian perspective and experience. Standard interpretations of the decline of the Roman Empire in the West view the barbarian invaders as destroyers. Thompson, however, argues that the relationship between the invaders and the invaded was far more complex than the common interpretation would suggest. This edition includes a new foreword by F.M. Clover and J.H.W.G. Liebeschuetz.
AUTHOR BIOGRAPHY
E. A. Thompson (1914–1994) was professor of classics at the University of Nottingham in England from 1948 to 1979. His many books include A History of Attila and the Huns, The Visigoths in the Time of Ulfila, and The Goths in Spain.
REVIEWS
"Romans and Barbarians can and should be recommended to students of the late Roman Empire, of early Germanic history and society, and of the early medieval history of the Mediterranean area and of western and central Europe. . . . Thompson himself points out that very rarely if ever can we penetrate into the minds and attitudes of the barbarians whom we are trying to understand. In this and other writings Thompson has come as close to achieving this ideal as anyone is likely to."—Welden A. Ernest, German Studies Review