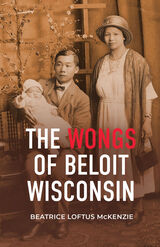 Through family interviews, original photographs, and national records, Beatrice Loftus McKenzie traces the many lives of a resilient multigenerational family whose experiences parallel the complicated relationship between America and China in the twentieth century. In the early 1900s, Charles Wong moved from Guangdong Province to the United States and opened the Nan King Lo Restaurant in Beloit, Wisconsin. Soon after, his wife Yee Shee joined him to build the "Chop House" into a local institution and start a family. When the Great Depression hit, the Wongs shared what they had with their neighbors. In 1938, Charles's tragic murder left Yee Shee to raise their seven children—ages one through fourteen—on her own. Rather than return to family property in Hong Kong, she and her children stayed in Beloit, buoyed by the friendships they had forged during the worst parts of the 1930s.

The Wongs thrived in Beloit despite facing racism and classism, embracing wartime opportunities, education, love, and careers within the U. S. McKenzie's collaboration with descendent Mary Wong Palmer reveals a poignant story of Chinese immigrant life in the Upper Midwest that adds a much-needed Wisconsin perspective to existing literature by and about Asian Americans.
AUTHOR BIOGRAPHY
Beatrice Loftus McKenzie is an emeritus professor of history and held the William and Gayle Keefer Professor of Public Humanities from 2017–2021 at Beloit College.
REVIEWS
"The details of how something like Chinese exclusion or the Nixon rapprochement with China affected the members of a family are fascinating and breathe new life into what is usually a few sentences in a textbook. That the setting is the small-town Midwest unsettles the longstanding focus on California and on urban centers in both Asian American history scholarship and narratives."—Ji-Yeon Yuh, Northwestern University