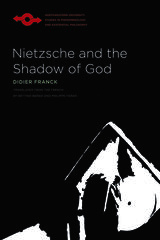 In Nietzsche and the Shadow of God (Nietzsche et l’ombre de Dieu), his study of Nietzsche’s integral philosophical corpus, Franck revisits the fundamental concepts of Nietzsche’s thought, from the death of God and the will to power, to the body as the seat of thinking and valuing, and finally to his conception of a post-Christian justice. The work engages Heidegger’s interpretation of Nietzsche’s destruction of the Platonic-Christian worldview, showing how Heidegger’s hermeneutic overlooked Nietzsche’s powerful confrontation with revelation and justice by working through the Christian body, as set forth in the Epistles of Saint Paul and reread both by Martin Luther and by German Idealism. Franck shows systematically how Nietzsche “transvalued” the metaphysical tenets of the Christian body of believers. In so doing, he provides an unparalleled demonstration of the coherence of Nietzsche’s project and the ways in which the revaluation of values, amor fati, and the trials of eternal recurrence reshape the living self toward a creative existence beyond original sin—indeed, beyond an ethics of “good” versus “evil.”

Bergo and Farah’s clear translation introduces this work to an English-speaking audience for the first time.
AUTHOR BIOGRAPHY
Didier Franck is a professor of philosophy at the Université de Paris X, Nanterre, and a scholar of Husserl, Heidegger, and Nietzsche. He is the author most recently of L'un-pour-l'autre: Levinas et la signification (2008).

Bettina Bergo is an associate professor of philosophy at the Université de Montréal. She has edited and translated many works, including Nietzsche and Levinas: "After the Death of a Certain God" (with Jill Stauffer, 2009). Bergo is the author of Levinas Between Ethics and Politics (2002). Philippe Farah is a graduate student in the philosophy department at the Université de Montréal.
REQUEST ACCESSIBLE FILE