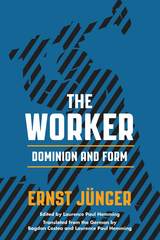 Written in 1932, just before the fall of the Weimar Republic and on the eve of the Nazi accession to power, Ernst Jünger’s The Worker: Dominion and Form articulates a trenchant critique of bourgeois liberalism and seeks to identify the form characteristic of the modern age. Jünger’s analyses, written in critical dialogue with Marx, are inspired by a profound intuition of the movement of history and an insightful interpretation of Nietzsche’s philosophy.

Martin Heidegger considered Jünger “the only genuine follower of Nietzsche,” singularly providing “an interpretation which took shape in the domain of that metaphysics which already determines our epoch, even against our knowledge; this metaphysics is Nietzsche's doctrine of the ‘will to power.’” In The Worker, Jünger examines some of the defining questions of that epoch: the nature of individuality, society, and the state; morality, justice, and law; and the relationships between freedom and power and between technology and nature.

This work, appearing in its entirety in English translation for the first time, is an important contribution to debates on work, technology, and politics by one of the most controversial German intellectuals of the twentieth century. Not merely of historical interest, The Worker carries a vital message for contemporary debates about world economy, political stability, and equality in our own age, one marked by unsettling parallels to the 1930s.
AUTHOR BIOGRAPHY
ERNST JÜNGER (1895–1998) was a German novelist and essayist perhaps best known to English-speaking audiences for Storm of Steel, based on his experience as a German soldier in World War I.

LAURENCE PAUL HEMMING is a professor at Lancaster University in the Management School and in the Department of Politics, Philosophy, and Religion. He is the author of Heidegger and Marx: A Productive Dialogue over the Language of Humanism and Heidegger's Atheism: The Refusal of a Theological Voice.

BOGDAN COSTEA is a professor at Lancaster University Management School in the Department of Organisation, Work, and Technology. He is an editor (with Laurence Paul Hemming and Kostas Amiridis) of The Movement of Nihilism: Heidegger's Thinking after Nietzsche.
TABLE OF CONTENTS


Contents
Foreword
Translators’ Notes
Preface            (1963)
Preface to the First Edition (1932)
First Part
The age of the third estate as an age of illusory dominion
The worker reflected in the mirror of the bourgeois world
The form as a whole, which includes more than the sum of its parts
The irruption of elemental powers into bourgeois space
Within the work-world, the demand for freedom arises as demand for work
Power as representation of the form of the worker
The relationship of the form to the manifold
Second Part
On work as a way of life
The decline of the mass and of the individual
The replacement of the bourgeois individual with the typus of the worker
The difference between the hierarchies of the typus and the individual
Technology as mobilization of the world through the form of the worker
Art as forming of the work-world
The transition from liberal democracy to the work-state
The replacement of social contracts by the work-plan
Conclusion
Overview