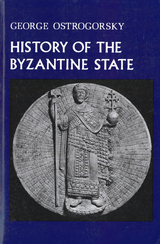 With clarity and logic, George Ostrogorsky succinctly traces the intricate thousand-year course of the Byzantine Empire. While his emphasis is on political development, he gives extensive consideration to social, esthetic, economic, and ecclesiastical factors as well. He also illuminates the Empire’s links with classical antiquity, as well as its effect on contemporaneous and subsequent European and Near Eastern history. The author captures the full sweep, the grandeur, and the tragic course of Byzantium’s rise and fall, backed by the scholarship and authority of a lifetime devoted to its study.

Long recognized as the basic history of the Byzantine Empire, this masterful work incorporates the results of the vast expansion in Byzantine research in recent years. This edition has been completely retranslated by Professor Joan Hussey from the third German edition. The text and annotation have been expanded by over seventy pages, with more than double the number of illustrations, and additional reference tables and lists.