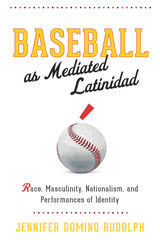 In her incisive study Baseball as Mediated Latinidad: Race, Masculinity, Nationalism, and Performances of Identity, Jennifer Domino Rudolph analyzes major league baseball’s Latin/o American players—who now make up more than twenty-five percent of MLB—as sites of undesirable surveillance due to the historical, political, and sociological weight placed on them via stereotypes around immigration, crime, masculinity, aggression, and violence. Rudolph examines the perception by media and fans of Latino baseball players and the consumption of these athletes as both social and political stand-ins for an entire culture, showing how these participants in the nationalist game of baseball exemplify tensions over race, nation, and language for some while simultaneously revealing baseball as a practice of latinidad, or pan-Latina/o/x identity, for others. By simultaneously exploring the ways in which Latino baseball players can appear both as threats to American values and the embodiment of the American Dream, and engaging with both archival research and new media representations of MLB players, Rudolph sheds new light on the current ambivalence of mainstream American media and fans towards Latin/o culture.
AUTHOR BIOGRAPHY
Jennifer Domino Rudolph is Associate Professor of Hispanic Studies at Connecticut College and author of Embodying Latino Masculinities: Producing Masculatinidad.
REVIEWS
“There have been many successful Latinos in baseball but doubts about them remain. This work skillfully examines why the game and its fans often see Latinos as ‘others’ on the diamond. If the game is to benefit from this talent, such questions must be addressed. Baseball as Mediated Latinidad helps frame that discussion extremely well.” —Jorge Iber


“Baseball as Mediated Latinidad will no doubt chart new terrain in Latin/o American studies, gender studies, and media and cultural studies. This is a brilliantly argued and masterfully conceptualized book.” —Richard T. Rodriguez

Chapter 2        Who May Sing the National Anthem?: MLB, the WBC, and Representations of Latin/o American Nationalisms

Chapter 3        Aquí (no) se habla español!: MLB, Media, and the Racialization of Spanish Language Use

Chapter 4        “You Can’t Walk off the Island”: MLB’s Racialized Labor Structure and the Pressure to Produce from the Academia to the Major Leagues

Chapter 5        “The Blizzard of Oz, A-Fraud, Manny Being Manny, and Deadbeat Dad,”: MLB and the Limits of Latino Character

Conclusion      “Yo quiero jugar como David Ortiz”: Final Thoughts on Race and the Viability of MLB’s Latin/o American Dream in the US Context