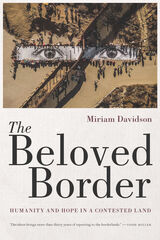 BUY FROM
The Beloved Border: Humanity and Hope in a Contested Land
by Miriam Davidson
University of Arizona Press, 2021
eISBN: 978-0-8165-4420-2
Paper: 978-0-8165-4216-1
Kids in cages, family separations, thousands dying in the desert. Police violence and corruption. Environmental devastation. These are just some of the dramatic stories recounted by veteran journalist Miriam Davidson in The Beloved Border. This groundbreaking work of original reporting also gives hope for the future, showing how border people are responding to the challenges with compassion and creativity.

The book draws on a variety of sources to explain how border issues intersect and how the current situation, while made worse under the Trump administration, is in fact the result of decades of prohibition, crackdowns, and wall building on the border. Davidson addresses subjects such as violence in Mexico, particularly against the press; cross-border gun smuggling and legal gun sales; the rise in migrant detentions, deportations, and deaths since the crackdown began; controversy over humanitarian aid in the desert; border patrol crimes and abuses; and the legal, ethical, and moral issues raised by increased police presence and militarization on the border. The book also looks at the environmental impact of wall building and construction of a planned copper mine near Tucson, especially on the jaguar and other endangered species.

Davidson shares the history of sanctuary and argues that this social movement and others that have originated on the border are vanguards of larger global movements against the mistreatment of migrant workers and refugees, police brutality, and other abuses of human and natural rights. She gives concrete examples of positive ways in which border people are promoting local culture and cross-border solidarity through health care, commerce, food, art, and music. While death and suffering continue to occur, The Beloved Border shows us how the U.S.-Mexico border could be, and in many ways already is, a model for peaceful coexistence worldwide.
AUTHOR BIOGRAPHY
Miriam Davidson is a Tucson-based writer whose work focuses on border issues. She is author of two previous University of Arizona Press books, Convictions of the Heart and Lives on the Line.
TABLE OF CONTENTS
Cover
Praise for Miriam Davidson
Title page
Copyright
Dedication
Contents
Prologue: A Fable for Tomorrow
I. GANGLAND
One. Mexico’s Torment
From Paradise to Gangland
No Excuse
A Litany of Impunity
Two. Prohibition Then and Now
The Border Then
The Border Transformed
The Border Now
Three. Where the Guns Go
Fast and Furious
Where the Guns Go
Profiteers Big and Small
II. SLAVERY
Four. All They Will Call You
Operation Streamline
Kids in Detention
Deportees
Five. Death in the Desert
The Man in the Road
Water Poured Out
Naming the Dead
Six. Under Color of Law
Border Agents on Trial
Checkpoints
Waste, Fraud, and Abuse
III. THE PEACEABLE KINGDOM
Seven. The Triumph of Sanctuary
Sanctuary Established
Sanctuary Revived
Sanctuary Everywhere
Eight. The Jaguar
El Jefe
Viviendo con Felinos
“A Surprising Eden”
Nine. El Norte
El Grupo Guadalupano
The Solar Wall
El Norte
Epilogue: A Positive Vision for the U.S.-Mexico Region
Acknowledgments
Notes
Selected Bibliography
Index
About the Author