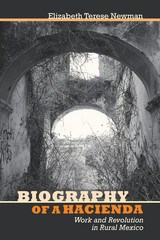 Biography of a Hacienda is a many-voiced reconstruction of events leading up to the Mexican Revolution and the legacy that remains to the present day. Drawing on ethnohistorical, archaeological, and ethnographic data, Elizabeth Terese Newman creates a fascinating model of the interplay between the great events of the Revolution and the lives of everyday people.

In 1910 the Mexican Revolution erupted out of a century of tension surrounding land ownership and control over labor. During the previous century, the elite ruling classes acquired ever-increasingly large tracts of land while peasants saw their subsistence and community independence vanish. Rural working conditions became so oppressive that many resorted to armed rebellion. After the war, new efforts were made to promote agrarian reform, and many of Mexico’s rural poor were awarded the land they had farmed for generations.

Weaving together fiction, memoir, and data from her fieldwork, Newman reconstructs life at the Hacienda San Miguel Acocotla, a site located near a remote village in the Valley of Atlixco, Puebla, Mexico. Exploring people’s daily lives and how they affected the buildup to the Revolution and subsequent agrarian reforms, the author draws on nearly a decade of interdisciplinary study of the Hacienda Acocotla and its descendant community. Newman’s archaeological research recovered information about the lives of indigenous people living and working there in the one hundred years leading up to the Mexican Revolution.

Newman shows how women were central to starting the revolt, and she adds their voices to the master narrative. Biography of a Hacienda concludes with a thoughtful discussion of the contribution of the agrarian revolution to Mexico’s history and whether it has succeeded or simply transformed rural Mexico into a new “global hacienda system.”
AUTHOR BIOGRAPHY
Elizabeth Terese Newman is an assistant professor of history and environmental humanities at Stony Brook University. She received her PhD in anthropology from Yale. Since 2006, Newman has directed a research project at Hacienda San Miguel Acocotla that examines the social and cultural origins of revolution in Puebla, Mexico.
TABLE OF CONTENTS


List of Illustrations
Acknowledgments
Introduction
1. One Hundred Years: From Independence to Revolution in Mexico
2. “A Place for Lizards and Archaeologists”: Historical Archaeology and the Hacienda San Miguel Acocotla
3. “Something We Already Know”
4. The Legacy of Revolution
5. San Miguel Acocotla: The Archaeology of a Central Mexican Hacienda
6. Crossmending: The Archaeology of Architecture and Home Life
7. What You Eat: Life and Labor in the Calpanería
8. Small Finds
Conclusion: “Un Platito de Frijoles”
Appendix: Cast of Characters
Notes
Glossary
Selected Bibliography
Index