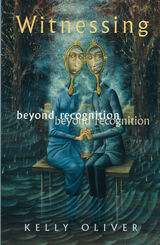 A new, ethically based theory of identity by a major scholar.

Challenging the fundamental tenet of the multicultural movement-that social struggles turning upon race, gender, and sexuality are struggles for recognition-this work offers a powerful critique of current conceptions of identity and subjectivity based on Hegelian notions of recognition. The author's critical engagement with major texts of contemporary philosophy prepares the way for a highly original conception of ethics based on witnessing.

Central to this project is Oliver's contention that the demand for recognition is a symptom of the pathology of oppression that perpetuates subject-object and same-different hierarchies. While theorists across the disciplines of the humanities and social sciences focus their research on multiculturalism around the struggle for recognition, Oliver argues that the actual texts and survivors' accounts from the aftermath of the Holocaust and slavery are testimonials to a pathos that is "beyond recognition."

Oliver traces many of the problems with the recognition model of subjective identity to a particular notion of vision presupposed in theories of recognition and misrecognition. Contesting the idea of an objectifying gaze, she reformulates vision as a loving look that facilitates connection rather than necessitates alienation. As an alternative, Oliver develops a theory of witnessing subjectivity. She suggests that the notion of witnessing, with its double meaning as either eyewitness or bearing witness to the unseen, is more promising than recognition for describing the onset and sustenance of subjectivity. Subjectivity is born out of and sustained by the process of witnessing-the possibility of address and response-which puts ethical obligations at its heart.

"In a tour de force, nourished by a host of thinkers from Levinas to Fanon, Kristeva, Butler, and Irigaray among others, Oliver works her way back behind the many philosophical anthropologies based upon the preeminence of recognition in the formation of a subject. Witnessing is a work of positive, exhortatory philosophy." --Continental Philosophy Review

Kelly Oliver is professor of philosophy and women's studies at SUNY Stony Brook. She is the author of, among other works, The Colonization of Psychic Space (2004) and, with Benigno Trigo, Noir Anxiety (2002).