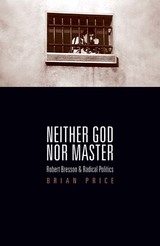 The French auteur Robert Bresson, director of such classics as Diary of a Country Priest (1951), The Trial of Joan of Arc (1962), The Devil, Probably (1977), and L’Argent (1983), has long been thought of as a transcendental filmmaker preoccupied with questions of grace and predestination and little interested in the problems of the social world. This book is the first to view Bresson’s work in an altogether different context. Rather than a religious—or spiritual—filmmaker, Bresson is revealed as an artist steeped in radical, revolutionary politics.
Situating Bresson in radical and aesthetic political contexts, from surrealism to situationism, Neither God nor Master shows how his early style was a model for social resistance. We then see how, after May 1968, his films were in fact a series of reflections on the failure of revolution in France—especially as “failure” is understood in relation to Bresson’s chosen literary precursors, Dostoyevsky and Tolstoy, and Russian revolutionary culture of the nineteenth century.
Restoring Bresson to the radical political culture from which he emerged—and to which he remained faithful—Price offers a major revision of the reputation of one of the most celebrated figures in the history of French film. In doing so, he raises larger philosophical questions about the efficacy of revolutionary practices and questions about interpretation and metaphysical tendencies of film historical research that have, until now, gone largely untested.
AUTHOR BIOGRAPHY
Brian Price is associate professor of film and visual studies at the University of Toronto. He is coeditor of two volumes, On Michael Haneke and Color: The Film Reader, and a founding editor of World Picture, an online journal of critical theory.
TABLE OF CONTENTS


Introduction
1. Crime as a Form of Liberation: Modeling Revolt in Pickpocket and A Man Escaped
2. Word and Image, World and Nothingness: Logocentrism and Ironic Reversal in Procès de Jeanne d’arc, Diary of a Country Priest, and Les Anges du péché
3. Man and Animal, Master and Servant: Animals and Criminality Mouchette and Au hasard Balthazar
4. The Aftermath of Revolt: Une femme douce and the Turn to Color
5. Disintegration: Lancelot du Lac; or, the Failure of Identification and Totality
6. The Agony of Ideas: The Devil Probably and Revolutionary Discourse
7. The Last Gasp: L’Argent and the End of Socialism
Acknowledgments
Notes
Index