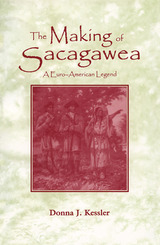 Kessler supplies both the biography of a legend and an explanation of why that legend has endured.

Sacagawea is one of the most renowned figures of the American West. A member of the Shoshone tribe, she was captured by the Hidatsas as a child and eventually became one of the wives of a French fur trader, Toussaint Charbonneau. In 1805 Charbonneau joined Lewis and Clark as the expedition's interpreter. Sacagawea was the only woman to participate in this important mission, and some claim that she served as a guide when the expedition reached the upper Missouri River and the mountainous region.

Although much has been written about the historical importance of Sacagawea in connection with the expedition, no one has explored why her story has endured so successfully in Euro-American culture. In an examination of representative texts (including histories, works of fiction, plays, films, and the visual arts) from 1805 to the present, Kessler charts the evolution and transformation of the legend over two centuries and demonstrates that Sacagawea has persisted as a Euro-American legend because her story exemplified critical elements of America's foundation myths-especially the concept of manifest destiny. Kessler also shows how the Sacagawea legend was flexible within its mythic framework and was used to address cultural issues specific to different time periods, including suffrage for women, taboos against miscegenation, and modern feminism.