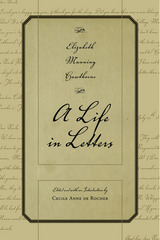 An annotated selection of unpublished letters by Nathaniel Hawthorne's sister.

Retrieved from seven different libraries, this corpus of letters was preserved by the Manning family chiefly for their value as records of Nathaniel Hawthorne's life and work; but they ironically also illuminate the life and mind of a fascinating correspondent and citizen of New England with incisive views and commentaries on her contemporaries, her role as a woman writer, Boston and Salem literary culture, and family life in mid-19th-century America.

This book illuminates Elizabeth's early life; the trauma caused for sister and brother by the death of their father; her and her brother's education; and the tensions the two children experienced when they moved in with their mother's family, the welthier Mannings, instead of the poorer though socially more venerable Hawthornes, following their father's death.  The letters portray Elizabeth's constrained relationship with Nathaniel's wife Sofia Peabody and counter Sophia's portrayal of her sister-in-law as a recluse, oddity, and "queer scribbler."

These 118 letters also reveal Elizabeth Hawthorne's tremendous gifts as a thinker, correspondent, and essayist, her interest in astronomy, a lifelong drive toward self-edification in many fields, and her extraordinary relationship with Nathaniel.  As a sibling and a fellow author, they were sometimes lovingly codependent and sometimes competitive.  Finally, her writing reveals the larger worlds of politics, war, the literary landscape, class, family life, and the freedoms and constraints of a woman's role, all by a heretofore understudied figure.