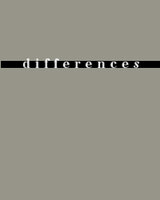 BUY
Derrida's Gift, Volume 16
edited by Elizabeth Weed and Ellen Rooney
Duke University Press
Paper: 978-0-8223-6650-8
In this special issue of differences, leading feminist theorists acknowledge Derrida’s contribution to feminist theory, discuss the crucial place of difference in both Derridian deconstruction and feminist theory, and reflect on the ethical, professional, and epistemological implications of Derrida’s thought for the discipline of women’s studies.

In bringing together major feminist critics whose work has been touched by the writings of Derrida, this issue both pays tribute to and reflects upon Derrida’s ideas. Among the essayists included, Jane Gallop considers Derrida’s writings on Levinas; Judith Butler reads Derrida’s final interview in Le Monde in 2004; Elizabeth Grosz signals Derrida as a rare philosopher for whom sexual difference was crucial; Gayatri Chakravorty Spivak explores the figure of the mother’s child in Derrida, focusing on the critique of reproductive heteronormativity and the question of agency in feminism; and Joan Wallach Scott argues for the importance of critique in the academy. The issue also includes an edited transcription of a vibrant discussion between feminist theorists and Derrida called “Women in the Beehive: A Seminar with Jacques Derrida,” which took place at Brown University’s Pembroke Center for Teaching and Research on Women in 1984.