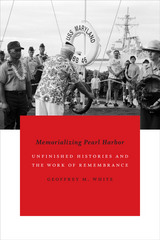 Memorializing Pearl Harbor examines the challenge of representing history at the site of the attack that brought America into World War II. Analyzing moments in which history is re-presented—in commemorative events, documentary films, museum design, and educational programming—Geoffrey M. White shows that the memorial to the Pearl Harbor bombing is not a fixed or singular institution. Rather, it has become a site in which many histories are performed, validated, and challenged. In addition to valorizing military service and sacrifice, the memorial has become a place where Japanese veterans have come to seek recognition and reconciliation, where Japanese Americans have sought to correct narratives of racial mistrust, and where Native Hawaiians have challenged their ongoing erasure from their own land. Drawing on extended ethnographic fieldwork, White maps these struggles onto larger controversies about public history, museum practices, and national memory.
AUTHOR BIOGRAPHY
Geoffrey M. White is Professor Emeritus of Anthropology at the University of Hawai‘i. He is the coeditor of Perilous Memories: The Asia-Pacific War(s), also published by Duke University Press, and author of Identity through History: Living Stories in a Solomon Islands Society.
REVIEWS
-- C. J. Weeks Choice

Appendix 3. Chronology of Internment of Japanese Americans and Japanese Residents  289