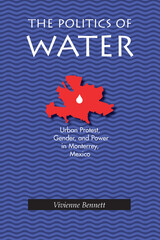 Monterrey is Mexico’s second most important industrial city, emerging in this era of free trade as a cornerstone of Mexico’s economic development.  But development has been uneven and has taken a toll: As recently as the early 1980s, nearly a quarter of the city’s almost three million inhabitants did not have running water in their homes.  At the same time, heavy industry - especially steel, iron, chemical, and paper works - were major users of water in their production processes.

Extensive industrialization coupled with a lack of infrastructure development astonishing in a major industrial city raises serious questions about the process of planning urban services in Mexico.  Bennett uses the water crisis of the 1980s as a lens through which to reveal this planning process and the provision of public services in Monterrey.  She finds three groups who were central to the evolution of the city’s water system: federal and state government leaders, the regional private sector elite (the Grupo Monterrey), and women living in the low-income neighborhoods of the city.

Bennett unravels the politics of water in Monterrey by following three threads of inquiry.  First, she examines the water services themselves - what was built, when, why, and who paid for them.  She then reveals the response of poor women to the water crisis, analyzing who participated in protests, the strategies they used, and how the government responded.  And, finally, she considers the dynamics of planning water services for the private sector and the government in investment and management.  In the end, Monterrey’s water services improved because power relations shifted and because poor women in Monterrey used protests to make national news out of the city’s water crisis.

The Politics of Water makes a significant contribution to the emerging scholarship on regional politics in Mexico and to a deeper understanding of the Monterrey region in particular.  Until recently, most scholarly writing on Mexico spoke of the national political system as a monolithic whole.  Scholars such as Vivienne Bennett are now recognizing the power of local citizens and the significant differences among regions when it comes to politics, policy  making, and governmental investment decisions.

"Useful and wide ranging, this case study manages to address a number of topics. . . . Bennett tells the fascinating story of low-income housewives who took to the streets, blocked traffic, and kidnapped and held hostage water agency personnel. practically leaderless, they were sucessful in meeting their objectives, at least in part because leasders could not be coopted or removed. . . . However. . . once their demands for water are satisfied, protest and mobilization disappear." —American Political Science Review

TABLE OF CONTENTS
Contents
List of Figures
List of Tables
Acronyms and Glossary
Acknowledgments
1. Introduction
2. Urban Water Services: Theory and Planning
3. Buildup of a Crisis: The Evolution of Monterrey's Water Service, 1909–1985
4. The Voice of the People: Protests over Water Service in Monterrey Between 1973 and 1985
5. Gender, Class, and Water: The Role of Women in the Protests over Water
6. Agua Para Todos: The Government's Response to the Water Crisis
7. Conclusion: The Politics of Water
Appendix: Field Research
Notes
Bibliography
Index
REQUEST ACCESSIBLE FILE