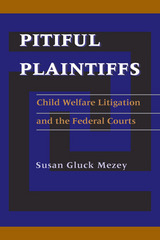 Beginning in the 1970s, children’s advocates asked the federal courts to intervene in the child welfare policymaking process. Their weapons were, for the most part, class action suits that sought widespread reform of child welfare systems. This book is about the tens of thousands of abused and neglected children in the United States who enlisted the help of the federal courts to compel state and local governments to fulfill their obligations to them. Based on a variety of sources, the core of the research consists of in-depth, open-ended interviews with individuals involved in the Illinois child welfare system, particularly those engaged in the litigation process, including attorneys, public officials, members of children’s advocacy groups, and federal court judges. The interviews were supplemented with information from legal documents, government reports and publications, national and local news reports, and scholarly writings. Despite the proliferation of child welfare lawsuits and the increasingly important role of the federal judiciary in child welfare policymaking, structural reform litigation against child welfare systems has received scant scholarly attention from a political science or public policy perspective. Mezey’s comprehensive study will be of interest to political scientists and public policy analysts, as well as anyone involved in social justice and child welfare.