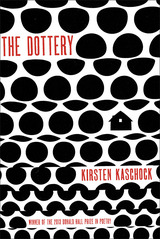 The Dottery is a tale of dotters before they are born. In this series of prose poems you meet their would-be-mutters, the buoys they will know, their inner warden, and the mutterers who cannot have them. The Dottery itself is a sort-of pre-purgatory, a finishing school for the fetal feminine. The five sections correspond to the conceptual set-ups interrogated within. In “wound,” The Dottery is described, as are its inhabitants and their difficulties. In “Dual,” a gender binary is introduced and (hopefully) eviscerated.  “Triage” establishes the issues that plague both the dotters and those who would bring them out into the world—specifically into the idea of America (I’m Erica and I can prefer a hummer to the rose parade”). In “Fear,” failed dotters (out in the world) are described in obit fashion. Finally, in “Thief” one mutterer recounts how she stole her dotter (“a snatched piece”) to become a mutter and chronicles both her desires and regrets.
AUTHOR BIOGRAPHY
Kirsten Kaschock is the author of two previous books of poetry: Unfathoms and A Beautiful Name for a Girl. She is also the author of a novel, Sleight, and the chapbook WindowBoxing. Kaschock teaches at Drexel University and lives in Philadelphia, Pennsylvania.
TABLE OF CONTENTS
Contents
1. wound
2. duel
3. triage
4. fear
5. thief
Acknowledgments
AWARDS
Donald Hall Prize in Poetry, 2013.
REQUEST ACCESSIBLE FILE