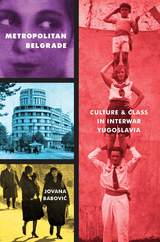 Metropolitan Belgrade presents a sociocultural history of the city as an entertainment mecca during the 1920s and 1930s. It unearths the ordinary and extraordinary leisure activities that captured the attention of urban residents and considers the broader role of popular culture in interwar society.

As the capital of the newly unified Yugoslavia, Belgrade became increasingly linked to transnational networks after World War I, as jazz, film, and cabaret streamed into the city from abroad during the early 1920s. Belgrade’s middle class residents readily consumed foreign popular culture as a symbol of their participation in European metropolitan modernity. The pleasures they derived from entertainment, however, stood at odds with their civic duty of promoting highbrow culture and nurturing the Serbian nation within the Yugoslav state.

Ultimately, middle-class Belgraders learned to reconcile their leisured indulgences by defining them as bourgeois refinement. But as they endowed foreign entertainment with higher cultural value, they marginalized Yugoslav performers and their lower-class patrons from urban life. Metropolitan Belgrade tells the story of the Europeanization of the capital’s middle class and how it led to spatial segregation, cultural stratification, and the destruction of the Yugoslav entertainment industry during the interwar years.
AUTHOR BIOGRAPHY
Jovana Babović is a historian with a PhD from the University of Illinois at Urbana-Champaign.
TABLE OF CONTENTS
CONTENTS
ACKNOWLEDGMENTS
INTRODUCTION
1. ENTERTAINMENT AND THE POLITICS OF CULTURE
2. RADIO BELGRADE AND THE MODERN URBAN LISTENER
3. YUGOSLAV PERFORMERS AND WORKING-CLASS ENTERTAINMENT
4. BELGRADE’S DOWNTOWN LEISURE DISTRICT
5. ACCOMMODATING JOSEPHINE BAKER IN BELGRADE
6. THE STRONGMAN DRAGOLJUB ALEKSIC’ AND THE OCCUPIED CITY
EPILOGUE
NOTES
WORKS CITED
INDEX
REQUEST ACCESSIBLE FILE