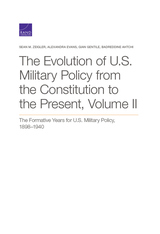 BUY FROM
The Evolution of U.S. Military Policy from the Constitution to the Present, Volume II: The Formative Years for U.S. Military Policy, 1898-1940
by Sean M. Zeigler, Alexandra Evans, Gian Gentile and Badreddine Ahtchi
RAND Corporation, 2020
Paper: 978-0-8330-9849-8
eISBN: 978-0-8330-9850-4
Tracing the evolution of the U.S. Army throughout American history, the authors of this four-volume series show that there is no such thing as a “traditional” U.S. military policy. Rather, the laws that authorize, empower, and govern the U.S. armed forces emerged from long-standing debates and a series of legislative compromises between 1903 and 1940. Volume II focuses on the laws enacted in the early 20th century that transformed the Army.
TABLE OF CONTENTS
Cover
Title Page
Copyright
Preface
Series Introduction
Contents
Figure and Tables
Summary
Acknowledgments
Chapter One: Introduction
Introduction
The Messy Victory over Spain
The U.S. Army in the Philippines
Postwar Debates and the Replacement of the 1792 Militia Act
Elihu Root and the 1903 Dick Act
Conclusion
After the Dick Act: The Debate Continued
1908: Amending the Dick Act and Establishing the Medical Reserve Corps
The Preparedness Movement
John McAuley Palmer and the 1912 Plan for Army Reorganization
The 1915 General Staff Plan
The 1916 National Defense Act
A Test of the 1916 Act: The Mexican Border Crisis
Conclusion
The Road to War
The 1917 Selective Service Act
Bringing the National Guard into Federal Service
Training the U.S. Army for War
Demobilizing the Army and the War’s Aftermath
The Army Reorganization Act of 1920
The Passage and Provisions of the Army Reorganization Act of 1920
Conclusion
Introduction
The Aftermath of the 1920 Amendment and the National Guard’s Drive for Dual Status
The Challenge of Fiscal Restraint for the Organized Reserves and the National Guard
The 1933 Amendment to the 1916 National Defense Act
The Road to War, 1939–1940
Conclusion
Chapter Six: Volume Conclusion
A. Summary Table of 19th Century Militias and Volunteer Forces
B. Summary Table of Legislation Pertaining to the Evolution of U.S. Military Policy
C. Taxonomy of Important Terms
Abbreviations
References